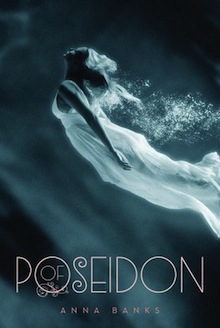 Galen is the prince of the Syrena, sent to land to find a girl he’s heard can communicate with fish. Emma is on vacation at the beach. When she runs into Galen—literally, ouch!—both teens sense a connection. But it will take several encounters, including a deadly one with a shark, for Galen to be convinced of Emma’s gifts. Now, if he can only convince Emma that she holds the key to his kingdom…

Told from both Emma and Galen’s points of view, here is a fish-out-of-water story that sparkles with intrigue, humor, and waves of romance.

*A copy was provided by Raincoast Books for review purposes*
With a beautiful cover like this it’s hard to resist not checking out what Of Poseidon is all about. I haven’t had the best of luck with mermaid books in the past, though I haven’t read very many of them. Of Poseidon is, so far, one of the better ones I’ve had the experience of reading. It has an interesting premise with a beautiful underwater world, but I did have a few quirks with it that stopped me from truly loving it.

Almost immediately, I felt like something was off with the writing. It has a great flow with entertaining dialogue and a good amount of humor, so what was the problem? Finally I realized that when we switched from one POV to the other, the grammatical person changed as well. We get Emma’s chapters in first person, and Galen’s in third. With fairly short chapters, the need to readjust every few pages made me feel a bit detached and disoriented. It didn’t affect my enjoyment of the book per se, it was rather a feeling that something was amiss.

For a book with such a strong character orientation, I was disappointed that almost every one of them didn’t sit well with me. We’ve got Emma; I could have easily liked her, she’s feisty and funny, but besides letting herself get treated like a child by Galen, her personality is very inconsistent. For example, she thinks herself the sweetest girl in her class, then she throws Galen’s sister through a window with murderous intentions. It was hard for me to get a read on her. As for her bizarre relationship with Galen: When she’s not complaining about him using her, she’s secretly wishing he would kiss her. I mean, Galen is great at first sight. He’s gorgeous with a knack for being charming. But in truth he’s controlling and lacks respect for her. He mentions wanting a girl who will do whatever he asks and never argue with him. Anyone? Plus his “serial killer eyes”… His ordering her around, never taking Emma seriously – it got on my nerves. To spite his demands, Emma reacts by doing the opposite of what he wants. In my opinion, this all came off as very juvenile. I simply couldn’t root for them, nor did I feel the thrill I expected from young love. However, they do have a few moments in the book that are amusing and cute. I also especially enjoyed the scenes where Toraf was involved. He’s the one character that I found sweet with a genuine personality.

The mermaid lore in the story is very thorough with impressive details. I loved learning about the Syrena: Poseidon and Triton houses, their abilities, their past, their culture. Though I’m not sure where I stand on specifics such as the fact that all they eat is seafood, or how it’s possible that they have been in contact with humans but stay ignorant on basic human knowledge – and then they know how to drive a car? These are pretty minor, though, and I was able to let it pass. No matter, there’s definite originality with a fun take on a well known mythology. We even go into some biology details that I was fascinated by. It’s obviously well thought out. As far as the plot goes, we don’t have a great deal of development. The book has the feel of a big introduction. We learn about the political situations, and we’re left with an interesting twist, but it’s overall a fairly slow paced story with no substantial breakthroughs.

I can’t fail to mention the Underwater scenes. Aquatic life can be very beautiful; filled with sea creatures, mysteries, and treasures – the parts where they visit the underwater world are easily my favorites. Galen takes Emma to one particular spot by which I was simply mesmerized. It’s all magnificently picturesque.

To be honest, even with all the problems I had with this novel, in this end I still found myself to have quite enjoyed it. The promising plot line and elaborate lore kept my attention throughout. I’m certainly interested in reading the sequel which I think may be more to my liking with, I assume, a more settled relationship and further plot advancements.

36 Responses to “Review: Of Poseidon by Anna Banks”