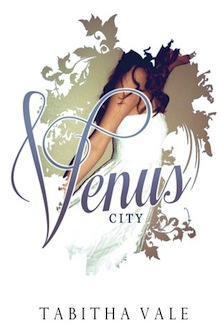 “His magenta eyes flashed up to meet hers and for a moment she thought she saw something spark behind them—something fierce, something challenging.”

In a city where boys’ eyes are magenta and their emotions of lust, anger, greed, and ambition are remarkably absent, spoiled Braya Vace finds herself in the biggest problem of her young life when she meets handsome, blue-eyed Asher Benedict. It wasn’t supposed to be possible. There wasn’t supposed to be anyone else living outside Venus City.

As she tries to unravel the mystery of Asher and his group of foreigner boys, the rest of Braya’s life seems to crumble apart around her. A disapproving mother, a sick younger sister, a mysterious brother, and a humiliating career as a Bride are just a few of the things that Braya has to deal with. Those, and her conflicting feelings for Asher.

*A copy was provided by Tabitha Vale for review purposes*
I’m a sucker for anything dystopian/post apocalypse. I get this unnatural urge to need to read any and all. Maybe it’s a sign the apocalypse is coming and my intuition knows I need to be prepared (and I will be!). Obviously, having read so many, my expectations have become quite high. It needs to stand out, become memorable and exciting with strong leads. Sadly, this one didn’t quite succeed.

Braya is spoiled rotten. She’s always gotten what she wanted, until now. I actually didn’t mind her high and mighty attitude at first. It was amusing and kind of entertaining. But then… (yep you knew it was coming), it just never stopped. She is constantly rude, then she gets these violent outburst; I did not like her, at all. My problems with her aren’t restricted to her attitude. Her whole personality strongly clashes with the type I can relate to. When she meets the Asher, the main male character, she wakes up with him having binded himself to her making it so he can control her. He can order her to do anything he wants, and she has to obey. If she doesn’t, the pain she feels is so severe she passes out from it. If it was me, I would have been PISSED off. Braya? She complains a bit, then shrugs it off. She doesn’t even ask why. Why her? What does he need control over her for? She wasn’t very unconcerned about it at all and to me that’s either incredibly naive, or simply unbelievable.

“The link that bonds us”, he said […] “has nothing to do with mind control, as you suspect. It’s merely a tool meant to make you do as I say”
“Oh Bray. I had hoped we could be the type of master and slave who got on well. Became friends. Built trust. Braided each other’s hair.”
-Quotes from finished copy of Venus City
Oh really? Is that all, Asher? Manipulator extraordinaire; not only does he call their “bond” master-slave, he can also turn invisible and uses this to follow her without her knowledge. Why is it that so many YA books nowadays have male leads that are complete jerks who we’re supposed to fall for (yes, Braya develops feelings for him)? I can not root for these guys. It’s just not in me. There are two main type of male personalities that I despise: one is the controller, the other is the creepy stalker. Asher, falling in both categories, makes my skin crawl. Furthermore, he refuses to give any answers to Braya about his whole purpose at Venus City, which to me felt like nothing more than a way to keep the reader in the dark. It’s a good approach when it’s suspenseful. But in this case it’s only irritating as there are no apparent reasons to be keeping secrets from her.

The dystopian future starts out very interesting and original. It reminded me vaguely of Wither: the girls are brides and they go through the training with their sister wives. The similarities end there, howevere. This one combines a lot of unique elements, from the addition of magic to intriguing lore. It’s strange, but I liked it. From the start I noticed it was more showing rather than telling. We have to go with the flow, getting bits and pieces of the world building periodically throughout the story. There are still a few dark holes left at the end, though. Mostly, I wanted to get to more of the bigger picture, especially further details about the war, past and present. Nonetheless, the world is creative, it has some beautiful imagery, and the plot is captivating. I also enjoyed the sister-wives who are all especially charming. I loved their butting differences and witty personalities. If it wasn’t for my dislike of the main roles I’m sure this novel would have appealed to me a great deal. But as it stands, it wasn’t enough to keep my interest and I ended up skimming the last 60 pages or so.

With so many dystopians, I have to say that Venus City does have some unique factors that makes the premise especially compelling. Regardless, I can’t really recommend it because I cringe at anyone being exposed to these behaviors and thinking they are acceptable.