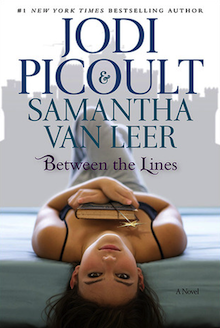 What happens when happily ever after…isn’t?

Delilah is a bit of a loner who prefers spending her time in the school library with her head in a book—one book in particular. Between the Lines may be a fairy tale, but it feels real. Prince Oliver is brave, adventurous, and loving. He really speaks to Delilah.

And then one day Oliver actually speaks to her. Turns out, Oliver is more than a one-dimensional storybook prince. He’s a restless teen who feels trapped by his literary existence and hates that his entire life is predetermined. He’s sure there’s more for him out there in the real world, and Delilah might just be his key to freedom.

Delilah and Oliver work together to attempt to get Oliver out of his book, a challenging task that forces them to examine their perceptions of fate, the world, and their places in it. And as their attraction to each other grows along the way, a romance blossoms that is anything but a fairy tale.

*A copy was provided by Simon & Schuster Canada for review purposes*
I’m not sure if the fact that I’ve read a few books by Jodi Picoult in the past affected my enjoyment of this novel, and even though I knew not to expect her usual story-type since it’s written with her daughter, this was a lot different than what I had envisioned. It’s a good book. It is. But I think it’s aimed at a younger YA audience and this is where I was left a little underwhelmed.

It’s a fairy tale in all it’s classic glory. This is a story about princes, love, friends, overcoming the impossible to get to your ever afters. Delilah, loner, social pariah, loves to lose herself in a story. This takes a whole new meaning when a character from a child’s illustrated book – sweet and charming Oliver – starts talking to her! Like all Jodi Picoult novels, the story is told from several perspectives. This case is a bit unique in that we have Delilah, we have Oliver, but also, we have Oliver’s story – the actual fairy tale in his book. I thought this gave it an extra kick, without disrupting the flow as they are generally kept short. Being a fan of multiple perspectives to begin with, I really enjoyed getting to know both Delilah and Oliver individually. Delilah is in the “real world” with real problems: a pretty average teenage life. I liked her character; the outcast who’s trying to escape by reading. She’s kept fairly plain Jane and I think a lot of readers will be able to relate to her. However, I found myself easily favoring Oliver’s POV. Oliver has been stuck in his fairy tale since it was written, with a “book” family of his own that makes his chapters vibrate with life. Oliver himself is a very likeable character with imperfections and an enchanting demeanor, but I especially adored every single one of the unusual people – and creatures – that we got to meet alongside him. I did notice some inconsistencies in his character, though, particularly in his knowledge of the real world – or Otherworld as he calls it – by mentioning things that would not have been possible for him to recognize or perceive. Maybe it simply needed to tell us more about how they acquired what they do know. Like I said, as I felt this was aimed at a younger YA audience, these small discrepancies are most likely expected to be overlooked, which is certainly manageable.

The story is, in one word, pleasant. For someone so young as a co-author, the writing is especially fluid with beautiful, almost cinematic, descriptions. Cute humor and adorable passages makes it a lighthearted novel. To spice things up a bit – my favorite part of the book – are the sketches and illustrations that are scattered throughout to give us a very fun reading experience: 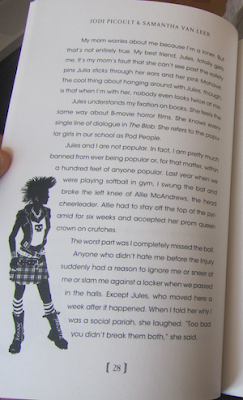 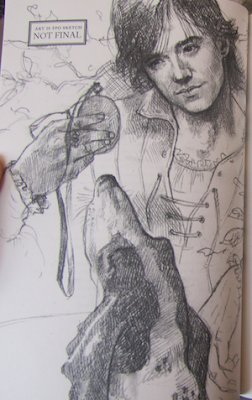 
After everything is said and done, a fairy tale is what you get. It’s cute, it’s fun, and it’s refreshing; what you expect from this story will factor in your enjoyment of it. I was effortlessly and quite easily kept entertained by its imaginative plot, but as I was expecting something a bit less fluffy, it failed to completely dazzle me. With that said, readers who are fascinated by fairy tales and have a weakness for happily-ever-afters will surely eat this one up!

29 Responses to “Review: Between the Lines”