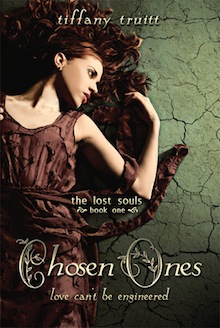 *A copy was provided by Entangled Publishing for review purposes*
Chosen Ones brings us into a dark, dreary future where humans are near extinction, and these perfectly crafted humans, genetically enhanced for war and protection, have all the power. Almost.

When you create a dystopian or post-apocalyptic future, details, explanation, showing AND telling, can make a big different to allow readers to suspend disbelief. I found the future of the world in Chosen Ones imaginative and alarmingly foreseeable. However, I found myself a bit dissatisfied with the lack of elaborations when it came to actually showing us this unique world. We’re told about the strict government control, about the compounds, about the constricted living choices, but we don’t actually experience a lot of this with instances. Although I wouldn’t go as far as saying it’s not a well-built world, it’s just not emphasized by letting us see the bleakness of the current living situations – only by the small bubble of Tess’s perspective. We’re also left wondering until almost the end about this apparent difficulty to have babies. Reading the synopsis afterwards, I think it’s meant to give a heads up on it being a “mysterious lost ability to bring forth life”, so from one who hadn’t read this synopsis in months, I was left confounded as to why or how her pregnant sister had died, let alone why there was talk of extinction. Despite these qualms, what we do encounter is brutal, it’s haunting, and it involves clear helplessness that left me terrifyingly entranced.

Chosen Ones is one of those post-apocalyptic stories that has romance at its core. Growing up in a society where emotions are seen as a sign of weakness, reproduction means death, thus falling in love is foolish – Tess never realized what falling in love meant. Meeting James – a beautiful, but surprisingly flawed, and remarkably human Chosen One – shows her what she’s missing. While I recognize the romance as a tad insta-lovey and predictable, I would never have thought that I would find it so appealing. I always fall pray to cases of forbidden love: Feeling the longing for, yet impossibility, of a happy ending grips me emotionally. It also helps when the male character is likeable – kind, sweet, but with a dark edge. Besides, even though it begins quickly, their relationship growth is realistically filled with ups and downs that leave us emotionally frayed.

The roller coaster ride is not unique to the romance; we’re also taken on quite the exceptional ride inside a plot that is brimming with unforeseeable turns. Although the pacing at the start is light, but steady, the second half of the book is exhilarating. Just when you think everything is gonna be settled for a bit… BAM. Instead of becoming overwhelming as I’ve seen happen, in this case, it’s very well balanced with just the right amount of intense excitement layered with sweet moments. Another aspect I found enticing, and an effective way to give us glimpses into the inner workings without impeding the flow of the story, – in fact it encourages it – is the inclusion of the letters written by Tess’s father. The emotions in those written words are prominent, setting the right mood by showing us the gravity of the situation.

No one and nothing can be trusted in Tiffany Truitt’s Chosen Ones. Betrayals, lies, cruelty, matched with a sexy, lustful romance – you can find it all inside this gorgeous cover.

33 Responses to “Review: Chosen Ones by Tiffany Truitt”