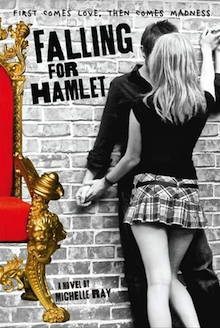 Sometimes love can make you crazy.

Meet Ophelia, high school senior, daughter of the Danish king’s most trusted adviser, and longtime girlfriend of Prince Hamlet. She lives a glamorous life and has a royal social circle, and her beautiful face is splashed across magazines and television screens. But it comes with a price–her life is ruled not only by Hamlet’s fame and his overbearing royal family but also by the paparazzi who hound them wherever they go.

After the sudden and suspicious death of his father, the king, Hamlet spirals dangerously toward madness, and Ophelia finds herself torn, with no one to turn to. All Ophelia wants is to live a normal life. But when you date a prince, you have to play your part.

*A copy was provided by Hachette Book Group Canada for review purposes*
“Mistakes and miscommunications. Violent love and violent hate. Betrayals and desire. Our beginning, our middle, and our end.”
-quoted from Falling for Hamlet


First let me state that this is my first time experiencing Hamlet’s story. Having gone to a French school, Shakespeare’s work was not part of our curriculum, hence my unfamiliarity with it. In addition, I’ve never had the opportunity to see it as a play as there are no production where I live. So yes, Shakespeare… not my forte; but I’m happy to report that I quite enjoyed Falling for Hamlet. Obviously I can’t comment on any comparison; the author’s notes at the end are very interesting, however, and showcase what she’s changed, added, and modernized.

I’m not going to go into the study of Hamlet’s character. Whole classes are taken up to discuss this. I actually spent a bit of time to Google Hamlet once I started it and found myself immersed by his madness and how this is actually left open to interpretation for the reader to decide what’s real, and what isn’t. How insane is he, really? I was obviously fascinated by his deeply complex characterization, but even moreso, how his madness seems to spread. This whole cast is really messed up! 😀 This can bring forth such a huge character study; like I said I won’t start an essay about it. Let’s just say that I have a shameless attraction to morbid tales like these. I love how incredibly tragic the characters’ lives become. They’re all so intense and dramatic; spiraling out of control. How can you look away? Michelle may not have created these characters, but she modernized their setting; made it fresh with some added material and extra twists that I’m confident fans of the original will enjoy.

The format – I loved it. We get the story in three different parts narrated by Ophilia: There’s the story that she tells Zara during a TV talk show interview (think Oprah), there’s her investigative interview, then there’s the truth. The latter is our main story, the others being only short passages to begin and end each chapters. Glimpses of her interview on the Zara show set the perfect tone for what’s to come. As for the investigation, it’s fun and adds an extra punch to the story, but I didn’t feel it was completely necessary. I will even admit to getting annoyed at the ridiculous accusations that are thrown regarding the smallest of details that are simply absurd. On the other hand it’s amusing to see Ophilia’s reactions to these.

I don’t really have to go into the plot. I mean, I’m sure I was in a very small minority who aren’t familiar with Hamlet. Michelle does modify it some while leaving the general story untouched (as stated in her notes). For instance, she begins the story before the King dies, she adds a lot of technology, and reworks how fast the media affects high profile lives with so much modern technology.

As a first experience, I can say it’s a wonderfully perplexing and violent tale that while I can’t compare to the original, I found myself incredibly enticed by this retelling. It’s such a tragic story of love and loss, manipulation and fear. It’s brilliant and thought provoking. If this is what one should expect from a modernized version of this tale, Michelle Ray nailed it.

35 Responses to “Review: Falling for Hamlet by Michelle Ray”