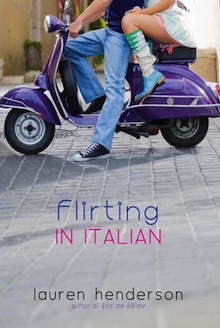 *A copy was provided by Random House Children’s
Books for review purposes*
I wanted to love this one. I’m so sad I didn’t. I was super in the mood for a fun, cute, romantic story with an engaging mystery mixed in – and in Italy to boot! It started on a good note, but unfortunately, it didn’t turn out as expected.

Sure it’s got plenty of cute Italian boys, but when these boys go from sweet one minute to condescending the next, I was left feeling very irritated towards them – particularly Luca, the main love interest. Violet herself spends the bigger part of the book flip flopping between realizing he’s a jerk, to fantasizing about him in the same instant. I eventually got exasperated by this whole ordeal, never growing to like him, nor did I feel any sort of rush from their romance. Which is a shame because in this setting it had the potential for extreme adorability.

We also have fun times: Plenty of parties, dancing, bonding with the girls. I enjoyed this quite a bit at the beginning. Especially how the girls band together against the vicious daughters; it feels like the start of a great alliance. Unfortunately, their friendship never seems to bloom. They don’t get considerably close or draw any sort of group dynamic. In fact, I was never really sure if they were actually friends or more like frenemies. I also kept forgetting who was who. They all sort of blend together after a bit – swallowed by their matching arrogance. Even our main character, Violet, isn’t very likeable. She’s ok at first, witty and outgoing, but because of her naivety and paranoia – mostly towards Luca – I was never able to really connect with her.

As for the mystery elements – they’re definitely intriguing. Finding a 1700s painting with what looks to be your twin is a largely appealing plot line. And when you add in alarming events that leaves you doubting everyone – you’ve got me hooked! But – yes there is a but – it simply does not deliver. The latter is incredibly predictable for using the obvious “least likely” character that I’ve seen done so many times (though I’ve read my fair share of mysteries). As for the painting mystery, I was left awfully underwhelmed. Actually, throughout the whole book it plays a very small role; nothing important happens for a long while, turning it into a mundane, yet light, read. Then at the end we’re left without any resolve. I know there is a sequel, but I honestly don’t see the point of splitting this story into two when nothing significant enough happens in this one to warrant a full novel.

What did I like? The Italian setting is fantastic with great descriptions of the country and culture. Although I did wish the Italian dialogue would have been translated more, I still appreciated getting glimpses of the language. I also enjoyed seeing Violet’s reactions to this new foreign land.

While I don’t consider it a bad book, I doubt I will be reading the sequel. I do think some readers could enjoy it especially if you’re looking for a quick vacation read filled with foreign personality. With different expectations I might have been more enthused by it, but as is, there wasn’t anything memorable in it for me.

44 Responses to “Review: Flirting in Italian”