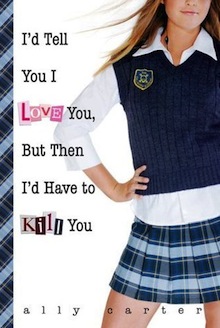 I’d Tell You I Love You,
But Then I’d Have to Kill You
Ally Carter
Series: Gallagher Girls #1
Release date: April 25th 2006
by Hyperion

Cammie Morgan is a student at the Gallagher Academy for Exceptional Young Women, a fairly typical all-girls school-that is, if every school taught advanced martial arts in PE and the latest in chemical warfare in science, and students received extra credit for breaking CIA codes in computer class. The Gallagher Academy might claim to be a school for geniuses but it’s really a school for spies. Even though Cammie is fluent in fourteen languages and capable of killing a man in seven different ways, she has no idea what to do when she meets an ordinary boy who thinks she’s an ordinary girl. Sure, she can tap his phone, hack into his computer, or track him through town with the skill of a real “pavement artist”-but can she maneuver a relationship with someone who can never know the truth about her?

Cammie Morgan may be an elite spy-in-training, but in her sophomore year, she’s on her most dangerous mission-falling in love.

*A copy was provided by Disney-Hyperion for review purposes*

Yes. I’m a full grown adult. Yes, I thought this was pretty freaking awesome! Don’t laugh at me!! *scowls*

These are the kinds of books I turn to when I want something fun and silly; a change of pace. A high-school-drama-filled book that I can read and enjoy without the need to use my brain a whole lot. It doesn’t claim to be a deeply significant story that will blow your mind with its complexity. It’s a relatively straightforward plot, but with all kinds of shameless fun, plenty of humor, an adorable romance, and of course, cool gadgets. Welcome to spy school!

“Every time I caught a glance at the world around us, I saw another year of my life flash before my eyes.”
–Quoted from finished copy of I’d Tell You I Love You, But Then I’d Have to Kill You

Cammie, spy in training, is witty, smart, independent, yet clueless when it comes to boys. She’s the perfect protagonist for this story. She got me laughing at her ridiculous antics and hilarious inner (sometimes outer) dialogue. Obviously, being a teenager, she makes plenty of dumb decisions especially when it comes to a boy she likes. However, her own logic is intelligent enough to make it rather amusing instead of annoying. Alongside Cammie we’ve got a truly fantastic cast of supporting characters who are well-rendered with relevant roles and loud personalities. Friends, family, teachers, classmates, outsiders; there’s a big bunch of colorful characters which I think is the main reason why I enjoyed this rather fluffy plot so much.

The spy elements in the story are kept fairly simple. We do see the characters in spy-mode, but it’s nothing that got me taking notes (yet. – Hey, you never know!). I found this book to be more of an introduction to the spy-school. We begin to uncover the secrets behind Gallagher Academy, which is thought to be a school for privileged elites, but instead, brims with magical possibilities and secret passageways. Oh, and martial arts training!! Boarding school stories are a guilty pleasure of mine. It’s unfamiliar territory for me in my small town, nowhere, Canada; I find myself enchanted by their mystique. Since I know we’ve only just scratched the surface of this uncanny school, I’m particularly looking forward to digging deeper inside its walls, as well as its inhabitants. This first book in the Gallagher Girls series has a plot that concentrates more on the cute, though predictable, romance between the protagonist and an outsider who has no idea what he’s getting into.

Strangely, with this said, regardless of how different both series obviously are, I kept being reminded of Harry Potter. The magical, secretive school, the large cast of sparkling personalities; evidently this series is quite a bit more frivolous and lighthearted (at least so far), but the vibe I get from it feels similar.

Fun and quirky, immature at times, implausible yet entertaining, I’d Tell You I Love You, But Then I’d Have to Kill You – which by the way I have to admit I love the titles in this series – is a delightful escape from reality. Yes it’s written for young’uns, but damn it, I had fun too!