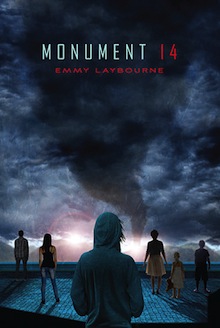 Your mother hollers that you’re going to miss the bus. She can see it coming down the street. You don’t stop and hug her and tell her you love her. You don’t thank her for being a good, kind, patient mother. Of course not—you launch yourself down the stairs and make a run for the corner.

Only, if it’s the last time you’ll ever see your mother, you sort of start to wish you’d stopped and did those things. Maybe even missed the bus.

But the bus was barreling down our street, so I ran.

Fourteen kids. One superstore. A million things that go wrong.

In Emmy Laybourne’s action-packed debut novel, six high school kids (some popular, some not), two eighth graders (one a tech genius), and six little kids trapped together in a chain superstore build a refuge for themselves inside. While outside, a series of escalating disasters, beginning with a monster hailstorm and ending with a chemical weapons spill, seems to be tearing the world—as they know it—apart.

*A copy was provided by Macmillan Children’s Publishing Group for review purposes*
We should all know by now, being stuck in a mall – or a superstore in this case – never EVER ends well. We’ve all had fantasies as children, imagining the awesome possibilities. Well, it’s not all it’s cracked up to be! Horror movies tell the truth! So yes, I was super intrigued by the premise of Monument 14 where a bunch of kids get trapped in a superstore to tough out what seems to be the end of the world. I didn’t like it as much as I’d hoped, but it’s an overall enjoyable read.

One thing that really bothers me about a writing style is when an author constantly feels the need to remind me of facts that has happened: Repeating information to make sure I’m “getting it”. This is what I first noticed in this novel. Recapitulations are common and only amounted to making me feel irritated. “because, remember […]” is even used, in case I wasn’t smart enough to have caught on – to something that was particularly major in this case. This is a qualm many readers may not notice or care about, but it’s a pet peeve of mine.

Quote I’ve always loved:
“The audience is only as smart as you allow them to be.”

The book starts with a bang. We get acquainted with Dean on a day like any other when it suddenly turns disastrous. Monster hail, a bus crash, injuries, deaths – a pretty exciting starting chapter. After this, however, be prepared for a lot of cooking, sleeping, cleaning; basically playing house. I’ve talked to others who say it’s meant to be a more psychological story, one that concentrates on the pressures of living through such a traumatizing event – and it is, I agree, but I never felt it. Until close to the end, these kids aren’t giving off a very distressed vibe. After the initial shock, they all seem comfortable and carefree. Playing with barbies, getting high, pigging out: Indulging themselves with everything a chain store has to offer. I wasn’t necessarily bored, but it wasn’t an emotionally powerful read up to that point. About 50 pages from the end is where it starts getting more serious with some intense developments and a bleak glimpse beyond the store. The sequel definitely has immense potential.

The lack of a distraught feeling could also be due to the fact that we don’t get a whole lot of information about the outside situation. It starts with the monster hail, then we learn of dangerous chemicals in the air, plus several other natural disasters – including a megatsunami. This all sounds highly ominous and sinister, except… we don’t know what we’re dealing with. What happened? Is this simply going to go away after 6 months as the news says, with things going back to normal and some minor setbacks? I don’t think the author successfully achieves to create the strong sense of alarm and dread that was intended. These events are scary – actually, deathly terrifying – in theory, but the lack of suspense throughout 90% of the book makes it feel like they’re simply unpleasant inconveniences.

Dean, socially awkward, is a bit of an outsider. I enjoyed his character overall and he’s a really good guy, but I didn’t find there was a lot of character building. At the beginning I was caught off guard when I learned he was male. It’s not made clear until a few pages in and the adjustment took a little bit; I kept forgetting and making him into a girl. I do enjoy male POVs so it wasn’t a disappointment, but I didn’t find it an especially convincing male perspective. Along with taking a while for his gender to stick, I felt he was very… ordinary. I think the fact that there’s such a big cast plays a role in this. We’ve got quite a few kids to keep track of and I found most of them to be a lot more interesting, taking my attention away from the main character.

It does seem like I have a lot of negativity towards this novel, but all in all I did like it. These mentions don’t cause enormous problems in the bigger picture so I was still able to enjoy the story enough to garner a 3-star. I do give final credit to the ending, though, which has definitely upped the ante, giving us quite a bit to look forward to in the sequel.