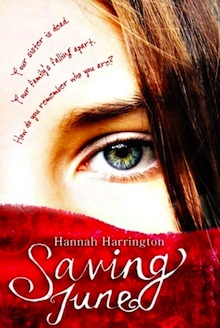 ‘If she’d waited less than two weeks, she’d be June who died in June. But I guess my sister didn’t consider that.’

Harper Scott’s older sister has always been the perfect one so when June takes her own life a week before her high school graduation, sixteen-year-old Harper is devastated. Everyone’s sorry, but no one can explain why.

When her divorcing parents decide to split her sister’s ashes into his-and-her urns, Harper takes matters into her own hands. She’ll steal the ashes and drive cross-country with her best friend, Laney, to the one place June always dreamed of going, California.

Enter Jake Tolan. He’s a boy with a bad attitude, a classic-rock obsession and nothing in common with Harper’s sister. But Jake had a connection with June, and when he insists on joining them, Harper’s just desperate enough to let him. With his alternately charming and infuriating demeanour and his belief that music can see you through anything, he might be exactly what she needs.

Except June wasn’t the only one hiding something. Jake’s keeping a secret that has the power to turn Harper’s life upside down again.

*A copy was provided by Harlequin UK for review purposes*
Even though this book is ultimately about loss and dealing with grief, it’s a very diverting read filled with life, humor, and romance. Being a road trip story, be prepared for some amusing sightseeing along with plenty of colorful characters.

Saving June begins very powerfully during the aftermath of June’s death. Harper finds herself in a bubble of grief, unable to even begin to understand why her sister killed herself. I could feel her heartache, as if it was my own. The emotional turmoil is extremely vivid and I was sure we were in for an overwhelmingly sad novel, but once the road trip begins it turns into a pleasant, beautiful story. After the initial explosion, though, the pacing can leave a bit to be desired until about half way. However, this leaves room for excellent character development and an incredibly sweet budding romance.

Extremely character oriented, Saving June brings forth a lot of vibrant personalities. Harper, herself, is frustrated and broken by her sister’s death, making her a very gripping, sympathetic protagonist. The two main supporting roles, Jake and Laney, both have distinct personalities that are very different from each other. We see them go from snappy to charismatic. Thus, there was bound to be some banter and disagreements, but they have this wonderful chemistry that makes them seem naturally connected to each other. We then have a band of eccentric characters that we meet along the way that range from charming to outlandish.

So powerful that it’s a character in itself, the music reverberates through the pages making it an important entity. It plays an immense part in Harper’s healing process. This book is filled with musical references that will capture any music buff. Although I was familiar with a lot of the music mentioned, it’s not to such a degree that made the frequent exchanges and debates mean as much as I think it should have. Nevertheless, its strong influence is undeniable.

As in the beginning, the conclusion yields a lot of emotional outbursts; it’s an intense, piercing ending. Some parts of it do feel a bit too convenient, but I was satisfied with it overall. Are you a music fanatic? Do you enjoy road trips? Brilliant characterization? Poignant story lines? Saving June will take you and enrapture you all through to the end!