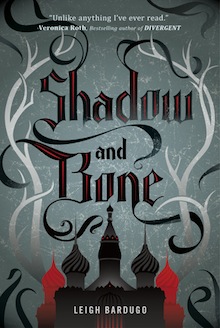 Surrounded by enemies, the once-great nation of Ravka has been torn in two by the Shadow Fold, a swath of near impenetrable darkness crawling with monsters who feast on human flesh. Now its fate may rest on the shoulders of one lonely refugee.

Alina Starkov has never been good at anything. But when her regiment is attacked on the Fold and her best friend is brutally injured, Alina reveals a dormant power that saves his life—a power that could be the key to setting her war-ravaged country free. Wrenched from everything she knows, Alina is whisked away to the royal court to be trained as a member of the Grisha, the magical elite led by the mysterious Darkling.

Yet nothing in this lavish world is what it seems. With darkness looming and an entire kingdom depending on her untamed power, Alina will have to confront the secrets of the Grisha…and the secrets of her heart.

*A copy was provided by Macmillan Children’s Publishing Group for review purposes*
While fantasy can be a hit or miss for me, I’m glad that I’m able to add another one to my hit pile. When I started Shadow and Bone I was a bit intimidated by the strange new world; by the bizarre terms such as Corporalki and Keramzin, or the ones I can’t even pronounce (ie Otkazat’sya); and also by all this talk of the Shadow Fold that was obviously important but I didn’t completely understand. However, as the world building is more showing rather than telling, the more I read, the more I was able to grasp the complexities of this world until I realized I was completely caught up in it. Don’t get overwhelmed by the infodump at the start as this book ends up having a fascinating world that becomes highly picturesque, with an enchanting cast of characters that brings it to life.

The reason for me not always liking fantasy is how very politically drowning they can be. Political intrigue can only keep my interest for so long before I begin to snooze. Shadow and Bone is definitely not the case. It has a kingdom, yes, but it doesn’t come with the usual redundant monarchy debacles I’ve come to expect – and run from. In here, we’ve got the mysterious, and terrifying, Shadow Fold filled with nothing but nightmares; we have shocking twists that are both dark and breathtaking; and most of all, we have Alina.

Alina comes off being a fragile little thing who can seem quite naive. But when she’s suddenly thrown into a world so unlike her own, with no one to trust and an incredible power she didn’t know she had, things get serious – fast! Thus, we get to watch her grow into a brave and powerful young woman. I really enjoyed seeing her blossom right in front of my eyes. This is genuine character development that makes you acknowledge her fears as well as understand her mistakes. She’s easy to like and even easier to root for; the kind of heroine that makes the story!

Now on to The Darkling – ominous sounding, no? His dangerous aura fits his name! However, couple this with an alluring charm and we’ve got ourselves a very compelling character. I was never really sure how much trust to lend him which made him even more intriguing. I constantly found myself wanting to know more about this cryptic being. This is not singular to him, however, the whole story is very character driven with a big, powerful cast.

Yes we have some romance, yes it’s dreamy and precious and magnetic and agonizing and exasperating, yes this is all I’m saying.

There is a lot happening in this novel, so much so that it does skim the surface on a few things – I was especially hoping for a deeper knowledge of the Grisha and everything surrounding their purpose. The world building is absolutely attractive, though a lot of it is meant to entertain more than to perfect. But overall: Dark, gritty, yet filled with humoristic bits, Shadow and Bone is a fresh, action packed fantasy that is beautifully written and highly engrossing. This is one that actually lives up to the hype!

37 Responses to “Review: Shadow and Bone by Leigh Bardugo”