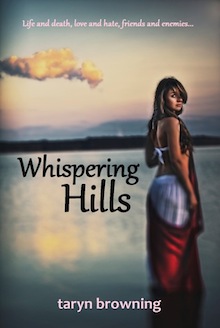 Life and death, love and hate, friends and enemies…

For as long as she can remember, 17-year-old Alexis Forbes can hear the thoughts of others. Most recently, she is disturbed by the dark, unfamiliar voice of a frightening killer: callous, cunning, charismatic…and dead.

She hears his every sinister thought. But she can’t tell anyone. No one would believe her. Alexis is suddenly being haunted by a terrifying past she doesn’t remember, and a ghost with a serious score to settle. Even Chance, the gorgeous new guy she’s falling for, has his own ghostly secret. He’s definitely not like any guy she’s ever met. Alexis soon discovers she has a connection to the dead and it runs much deeper than she could ever imagine. And if the sociopathic entity has his way, she’ll finally be sentenced to the fate she escaped thirteen years ago.

*A copy was provided by Taryn Browning for review purposes*
Whispering Hills’ plot which involves ghosts, witches, and telepathy is a sure way to lure me in, especially after having previously enjoyed Taryn’s work in Dark Seeker. It’s vastly different from her other series, however, and even though I never grew very fond of the characters in this novel, I was easily kept entertained by its suspense and mystery that are aplenty.

The characters are honestly the only reason that this novel failed to get me glued to its pages. The protagonist, Alexis, can come off as being a bit too naive for my taste: easily falling prey to traps and believing obvious lies. Then we’ve got Chance, the love interest, who is intriguing and mysterious, but his and Alexis’ romance never claimed my heart. There isn’t enough build up or natural progression to their relationship for me to have gotten a feel of their attraction. They start throwing the L word around after a mere few weeks and also seem to be a tad awkward with each other. Furthermore, we’ve got the villain, who is supposed to be terrifyingly powerful, not to mention evil, but only amounted to irritate me with his high and mighty attitude and embarrassingly weak jokes. I did, however, really click with Summer. I found her to be the most complex character. Her being a witch instantly pulled me in, but her cynical, yet caring attitude makes her compelling.

As far as the plot goes, it’s exciting with a creative approach to ghosts; touching base with fate and the order of things. It’s filled with twists that I never would have predicted, dramatic chapter cliffhangers that refuse to let you go, closing off with a chilling ending. It does take a couple of chapters to get a hint of what type of book we’re getting into. After this, though, it doesn’t take long for the action to begin for a non stop thrill ride to the end. The ghost story itself is very well crafted; both refreshing and original. The abilities also play a big part in the story: Witches with epic powers, and mind-reading – which is a very bittersweet ability to possess if you stop to think about it; Taryn makes use of these brilliantly, presenting them as equally creepy and enticing.

Whispering Hills, unique and action-packed, is perfect for readers who enjoy ghost stories with an extra paranormal punch. I was hoping for a bit more substance when it came to character building, but the captivating plot-line and fluid writing makes it easy to get caught up it the story regardless.