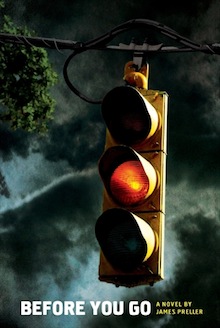 The summer before his senior year, Jude (yes, he’s named after the Beatles song) gets his first job, falls in love for the first time, and starts to break away from his parents. Jude’s house is kept dark, and no one talks much—it’s been that way since his little sister drowned in a swimming pool seven years ago when Jude was supposed to be watching her.

Now, Jude is finally, finally starting to live. Really live. And then, life spins out of control. Again.

With under 200 pages, Before You Go is a relatively short novel that is a breeze to get through – even moreso because of its short chapters. This is what I’m giving credit for the 3 stars. It’s not a contemporary that impressed me per say as it lacks depth, characterization, and the writing is awkward. Since it’s such a quick read, however, I didn’t get the chance to grow tired of it, nor can I say I downright disliked it.

In a few short words, this novel is about nothing. Jude still blames himself for his sister’s death, he’s simply living one day at a time, then he meets a girl. The book begins on an incredibly intriguing note with its somber prologue. I found it actually sets the wrong tone for the book. It gives the wrong impression of what type of vibe we’ll be getting from the story. What we get after this grim, suspenseful prologue is Jude’s normal, every day life. He goes to work, meets a few people, falls in love; a very mundane teenage summer. When we finally get to the climax built from the prologue, I won’t say it was emotionless as I felt a few pangs of sadness from the ordeal, but the passion was missing. The consequences are over very quickly; I didn’t get to experience Jude’s distress, nor did I peer at the mental ramifications of it all. A lot of emotions are simply missing from this novel. I’m not sure if it’s the characterization that didn’t click with me, or the writing that caused it.

The writing style may be lyrical, but it wasn’t my cup of tea. With innumerable pop culture reference, bizarre jokes, and awkward, sometimes puzzling, analogies, I had a very hard time really getting into this book with any sort of emotional attachment. Plus, I wasn’t ever sure what the plot was really about; the whole point of the story is still lost on me. Jude is in a rough patch in his life where he’s just dealing with everything that’s been building up over the years. This is clear within the first few pages, but where does it go from here? Does he have an epiphany that changes his way of thinking? Does he stumble upon a self-realization that finally opens him up, lets him deal with his closed up emotions, and move on? Both of which I expected, neither happened. I was really left confused at the end by the non-existent plot.

Jude is a very average character. He’s likeable and genuine, though I can’t say I was especially enamored with him, nor did I get a feel of his inner demons. I guess you could say I felt distant from him. This could be due to the methodical telling. For example, the constant use of “Jude” instead of “Him, or he” kept pulling me out of the story. OR, and this is probably more likely, it may be because of its omniscient point of view. I don’t find I have a preference over first or third person, both have been used very effectively, but the all-knowing style in Before You Go kept me at arms length. The secondary characters in the book, though stereotypical and not especially developed, are surprisingly fun characters with charming personalities that I really enjoyed. The romance is sweet and rough – very typical angst-ridden teen romance.

Even though I didn’t love it, it’s not a write off either as it kept my intrigued attention. A fairly short novel written in a male perspective that, if only you’re able to get a deeper connection with, I’m sure you will find it involves an array of raw emotions that may make this a memorable read.

27 Responses to “Review: Before You Go by James Preller”