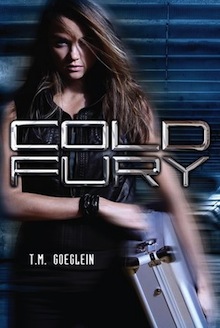 Jason Bourne meets The Sopranos in this breathtaking adventure

Sara Jane Rispoli is a normal sixteen-year-old coping with school and a budding romance–until her parents and brother are kidnapped and she discovers her family is deeply embedded in the Chicago Outfit (aka the mob).

Now on the run from a masked assassin, rogue cops and her turncoat uncle, Sara Jane is chased and attacked at every turn, fighting back with cold fury as she searches for her family. It’s a quest that takes her through concealed doors and forgotten speakeasies–a city hiding in plain sight. Though armed with a .45 and 96K in cash, an old tattered notebook might be her best defense–hidden in its pages the secret to “ultimate power.” It’s why she’s being pursued, why her family was taken, and could be the key to saving all of their lives.

Starting off slowly, Cold Fury begins by throwing us into Sara’s past – her family dynamics in particular – which has always been filled with whispers and secrets. This is all done via flashbacks and, while interesting, can become a bit tedious, or even confusing. Although I can’t say that I was ever bored as the mysteriousness kept my attention from faltering. Page 104 is where it really begins, with a bang. House in shambles, her family gone, on the run from what seems to be everyone who looks at her on the street; from this point on it’s action packed until the very end. A race for answers – literally! With her pursuers ranging from family members to crooked cops, no one and nowhere is safe.

Like action movies, it’s best to read this without thinking very much about the probabilities of what Sara conveniently stumbles upon that, at the very last second, saves her life. We’ve got the typical conveniently located trap doors, tunnels, insider connections, and, my personal favourite: ninja rats. Ninja. Rats. 😀 Trained and bread to become body guards of sorts, rats, among other things, are the deus ex machina of this plot. On the same wavelength, there are flashes of paranormal powers that certain members of the mob inhibits. I was hoping that this would get a deeper explanation, or at least a bigger meaning. A few vague passages that are barely more than a brush off are not enough to give credibility to these plot elements. Thus, it makes it seem like a lot of twists are simply added for some extra oomph that, ultimately, means nothing. However, it works to give an exciting action mob story. You just have to roll with the punches.

Badass, smart, determined, courageous, are some of the qualities we see in our protagonist, Sara. Her tomboy ways – including learning how to box at 4 years old – will appeal to those who like a little kick in their female leads. Though I will never understand why after days of her being attacked and almost killed several times as soon as she steps outdoors, she decides it would be a good idea to go to school. Education above all else? This detail aside, I found her personality refreshing, and her fierceness, engaging. With a Mafia implicated plot comes a large history where we see how Sara’s family comes into play in this complex, very well depicted, mob story which puts her right in the middle of it.

Yes, it has a very Bourne Identity feel to it, though I wouldn’t go as far as saying it compares to it (as one of my favourite movie sagas this would be a near impossible feat). Intense and exciting with an intriguing ending that has me looking forward to book 2; if you’re looking for an action-packed high speed chase, Cold Fury will definitely give you a run for your money!