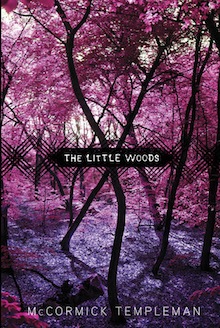 Are the woods behind St. Bede’s Academy really haunted, or does bad stuff just happen there? When Calista Wood, a new student, arrives midway through her junior year, St. Bede’s feels like a normal school . . . until she discovers that a girl had disappeared a couple of months earlier. Some kids think she ran away, others think she was murdered, but it’s only when Cally starts digging around that she finds the startling truth.

Watch as Cally enters a world of privilege, weekend-long parties, high school romances, and . . . well-kept secrets. This page-turner will appeal to teens looking for a fast-paced thriller. Written in a voice at once gripping and crystal clear, debut novelist, McCormick Templeman, will take readers on a twisting and turning journey as only a “new girl” can experience.

*A copy was provided by Random House Children’s Books for review purposes*
An eerie setting, a boarding school, a few missing girls – where do I sign up? I love the idea of this book, the vibe throughout is mysterious and slightly creepy. Yeah, maybe it wasn’t perfect, it needed better characterization and some things made the plot feel a bit discombobulated, but I had a good time.

Those who enjoy thrillers, mysteries, and everything creepy will undoubtedly love the atmosphere we get inside this novel. I think, in particular, those who haven’t read many books in the genre will be the ones to truly get lost in this story. Being an avid reader of thrillers, myself, I felt it was missing a little… something. The whole plot is very ordinary; we’ve got a typical mystery with predictable twists. Nothing makes it truly shine from all the rest. I found a lot of aspects unnecessary as well, where I kept wondering why these were added to the plot at all. Cheating, drugs, and sex, for example, which I have absolutely no problem with in YA novels as I find it makes them realistic and often relatable, I didn’t see the appeal in this case. Likewise, so many directionless bits (including seemingly random mentions of goddesses) are smushed inside this book which is already filled with more than enough betrayals, murders, mysteries, and secrets. I simply found a lot of it irrelevant for both plot and characterization, giving us nothing more than a whole bunch of superfluous information. For instance: Cally almost shaving her head. Was this supposed to fortify her already confusing personality? Or was it simply an uncalled for act of rebellion? There is also the big mystery element of the Woods itself that I thought would be examined further, yet it never goes beyond these singular occurrences. While the mystery we get is fun, chilling, and entertaining — easily 3-star worthy –, I had the impression it would be much grander. Instead of making it so crowded, strengthening the characters would have helped garner the strong impact intended.

The fact that it’s not a very character-oriented plot definitely makes the lack of character building easy to overlook. The main character, Cally, is extremely hard to identify with. Getting a feel of her personality is next to impossible, but I do admit to enjoying what I did perceive. She has an easygoing style that I was quickly attuned to. Although she’s incredibly naive when it comes to boys and relationships, I think we’ve all done stupid mistakes at that age, making it easy to understand her even when we want to slap her silly. The other characters, to be honest, I kept confusing who was who. No one particularly stands out, which is not a very big deal in a thriller such as this. Their purpose is for dramatic effects, for which it succeeds.

Dramatic, creepy, with enjoyable twists, The Little Woods is perfect for those who like thrillers that are spooky, but still lets you sleep well at night.

27 Responses to “Review: The Little Woods”