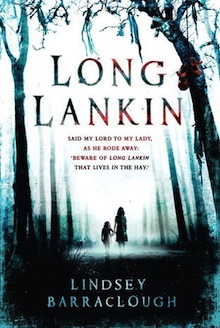 When Cora and her younger sister, Mimi, are sent to stay with their elderly aunt in the isolated village of Byers Guerdon, they receive a less-than-warm welcome. Auntie Ida is eccentric and rigid, and the girls are desperate to go back to London. But what they don’t know is that their aunt’s life was devastated the last time two young sisters were at Guerdon Hall, and she is determined to protect her nieces from an evil that has lain hidden for years. Along with Roger and Peter, two village boys, Cora must uncover the horrifying truth that has held Bryers Guerdon in its dark grip for centuries – before it’s too late for little Mimi. Riveting and intensely atmospheric, this stunning debut will hold readers in its spell long after the last page is turned.

Long Lankin is a tale that is quite slow paced, but in such a way that makes you fall addicted to the story. Its depictions of the creepy atmosphere, blood-curling ghostly creatures, and fascinating history leave you absolutely glued to its pages, not to mention chilled to the bone!

Set in the 1950’s, Long Lankin brings us to a time where WW2 was just over and poverty was very much a reality. Electricity was scarce, so were methods of communication. With this setting, we’ve got just a dash of dialect that makes the dialogue incredibly compelling; it gives the voices a genuinely convincing feel along with aiding the atmospheric countryside vibe to come to life. Our two main characters, Cora and Roger, both have legitimate teenage personalities. Their narrations are realistic, animating this story from both of their perspectives. The regular POV switches are very well managed throughout the book; the story move swiftly regardless of its slow-ish pace, in addition to keeping our curiosity and eagerness alive. Aunt Ida’s perspective also makes sporadic appearances, bringing us into the mind of this cold, angry old woman who has incredible depth to her character. No matter how awful she seems, you will be taken by her, I guarantee it!

“Then, among the tombstones, out of the air, small figures appear. They are all the size of little children, but their colourless faces are old and rotten, like the faces of the dead, their eyes nothing more than black holes, their hair grizzled and sparse. “
-Quoted from finished copy of Long Lankin

Aside from the character voices, the descriptions in the book are a work of art. The gloominess of the town, the forsaken church, Auntie Ida’s decaying, creaky old home, and best of all: the apparitions (ghosts/horrific children freak me OUT!); it’s all so brilliantly enticing: vivid and ominous. It’s more than enough to induce chills. Once you get close to the ending, especially, I would even consider terrifying.

We get this mystery solved in tiny bits and pieces, mostly from old research and townsfolk. I constantly wanted to know more, yet too caught up in the book to make up my own theories. This caused the actual story to remain a mystery until the very end. It’s not the type of plot you can really guess, even if you try, however. It’s unique, encompassing witchcraft, dark legends, engrossing history, and folklore. In fact, as seen along with the book trailer, — I wasn’t familiar with the Long Lankin song before — it’s “inspired by a haunting folk song about murder, witchcraft and revenge.” This all comes to a close a bit too narrow for my taste. Not that I didn’t like the ending; it’s shuddersome with plenty of suspense and a good completion. BUT, I will admit that I was secretly hoping for a shocking revelation or disturbing twist that left me breathless, so the neat ending is a little underwhelming in that sense. I do blame this on my masochistic horror loving taste.

Haunting and tension-filled, Long Lankin is a gripping read that you absolutely must read if you love Gothic horror novels. Expect a slow, but terrific story that brings together excellent writing, amazingly lively characters and a spine-chilling tale.