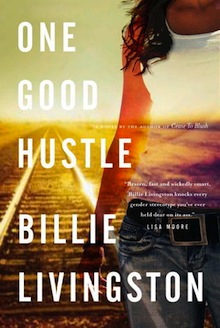 The child of 2 con artists, 16-year-old Sammie Bell always prided herself on knowing the score. But now she finds herself backed into a corner. After a hustle gone dangerously wrong, her mother, Marlene, is sliding into an abyss of alcoholic depression, spending her days fantasizing aloud about death–a goal Sammie is tempted to help her accomplish. Horrified by the appeal of this, Sammie packs a bag and leaves her mother to her own devices.

With her father missing in action, she has nowhere else to go but the home of a friend with 2 parents who seem to actually love their daughter and each other–and who awkwardly try to extend some semblance of family to Sammie. Throughout a long summer of crisis among the normals, Sammie is torn between her longing for the approval of the con-man father she was named for and her desire for the “weird, spearmint-fresh feeling” of life in the straight world. Sammie wants to be normal but fears that where she comes from makes that beyond the realm of possibility.

One Good Hustle chronicles 2 months in Sammie Bell’s struggle with her dread that she is somehow doomed genetically to be just another hustler.

*A copy was provided by Random House of Canada for review purposes*
As the child of 2 hustlers, Sammie did not have it easy. Now that her dad has left, and her mother spends her days (and nights) drinking, she has no choice but to go live at her friend’s house where she longs for… something. Her father? Normalcy? Love? One Good Hustle is the story of a young girl’s struggle over her identity, over how her life is likely to turn out.

As this is a chronicle, it’s a bit different from my typical contemporary reads. Instead of a front to back story, it’s essentially a simple, and thoroughly engrossing, depiction of Sammie’s life as a hustler’s daughter. From as far as she can remember, her parents have involved her in scams. Making her a part of their hustles and showing her the ropes. Due to her upbringing, one might expect Sammie to be this broken criminal with no sense of right and wrong. Instead, Sammie is a well-rounded, disciplined teenager who, even though she has done her share of cons, is in her right mind. She’s simply afraid that she’s doomed to end up like her parents. I found her personality very realistic for her situation. Even through all her mother’s faults, she stays a loyal and loving daughter. Never failing to have her back, even when she knows what people are saying is true. I loved her cleverness and spunky attitude throughout which makes the narration especially engaging.

Billie Livingston does not shy away from harsh situations and tough love in this novel. She shows us the nitty gritty of such a lifestyle and its consequences. Frequent flashbacks send us into Sammie’s childhood where we get instances of what it was like for her during a hustle, and, eventually, to the events that left her on her friend’s doorstep with a missing father and a drunk mother. When she’s taken in by her friend Jill’s family, she finally gets a glimpse of normalcy; getting to experience the other side of the coin. Consequently making her yearn, even more so, for a normal life. If I had one word to describe this story, it would be dirty. It’s rough, it’s jagged, and it’s a life that is not sugarcoated. I think it’s even listed as an adult novel despite being a teenager’s story. So don’t go in this expecting fluffiness and rainbows. There’s swearing, and cheats, and let downs, but there’s a little romance, humor, and wit to light up the grit, some.

Dark and riveting, Billie Livingston combines a dangerous atypical lifestyle with an insightful narrative of a teenager born on the wrong path. Don’t expect an action-packed, edge of your seat novel, though. It’s a chronicle of Sammie tackling what life has given her, rather than an action adventure. All in all, One Good Hustle is a brilliantly told and brutally honest story of one person’s struggles.

29 Responses to “Review: One Good Hustle by Billie Livingston”