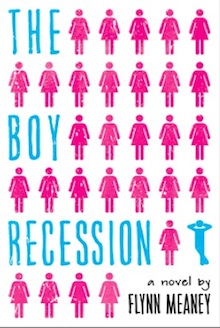 It’s all about supply and demand when a high school deals with the sudden exodus of male students.

The boy recession has hit Julius P. Heil High, and the remaining boys find that their stock is on the rise: With little competition, even the most unlikely guys have a good chance at making the team and getting the girl. Guitar-strumming, class-skipping Hunter Fahrenbach never wanted to be a hot commodity, but the popular girls can’t help but notice his unconventional good looks. With a little work, he might even by boyfriend material.

But for down-to-earth Kelly Robbins, the boy recession is causing all sorts of problems. She has secretly liked her good friend Hunter for a while now, but how can she stand out in a crowd of overzealous Spandexers?

As if dating wasn’t hard enough without a four-to-one ratio!

If you’re looking for a really light, fluffy, funny read, The Boy Recession will give you just that. At a very small school, after an awful lot of boys have moved away, the girls are left with a very limited number of date and prom choices. Providing quite a few chuckles and even some laugh-out-loud moments, it’s an overall satisfying, quirky novel.

Combining the dual perspectives of Kelly and Hunter, we meet two students at this school who are both on different grounds. One is striving to get noticed by the opposite sex, while the other is fighting them off. Despite the characters being quite enjoyable, I didn’t find them particularly complex. We’re only shown the surface of what they are both like, nothing deep rooted that truly gets our emotions involved. Both POVs are fairly well done and end up intertwining quite wonderfully. When it comes to Hunter’s POV, though, I found some of his inner monologue extremely typical, making it obvious it was written by a female author.

*Giselle in a husky voice impersonating Hunter* “I’m a guyyyy, I sleep until 2 and I eat Fritoooos. I wrestle my with my friends and play World of Warcraft all niiiiight. I like to be a slacker and be irresponsibleee.”

Ahem.
Yeah, so Hunter is a pretty stereotypical teenage boy. His personality is a bit hard to grasp, as well, as he does things that are contradictory to his slacker behaviour – like suddenly joining a school play. Oftentimes I simply felt awkward reading his perspective. Eventually, once passed a certain point, he does get a better development where he seems to come out of his shell; becoming more endearing and keeping up with the humoristic jabs that got me laughing.

Kelly’s character is a bit more convincing, coming off as having more substance. She’s not the most popular, nor the loner, just a normal everyday kid who realizes she’s got a crush on a boy. She’s a sweet girl that also got some laughs out of me with her clever sense of humor. Together, they surprisingly fit very well. Their relationship from the start — as friends — is adorable. It’s not a steamy, all encompassing romance, but an honest teenage relationship that can be both cheesy, and endlessly romantic.

A fun kookie adventure that is sort of a guilty pleasure drama fest, The Boy Recession is recommended for those who want a quick, no frill, read.

27 Responses to “Review: The Boy Recession by Flynn Meaney”