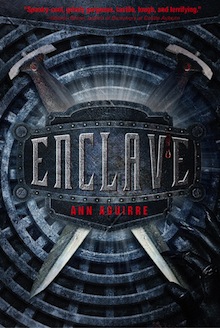 New York City has been decimated by war and plague, and most of civilization has migrated to underground enclaves, where life expectancy is no more than the early 20s. When Deuce turns 15, she takes on her role as a Huntress, and is paired with Fade, a teenage Hunter who lived Topside as a young boy. When she and Fade discover that the neighboring enclave has been decimated by the tunnel monsters—or Freaks—who seem to be growing more organized, the elders refuse to listen to warnings. And when Deuce and Fade are exiled from the enclave, the girl born in darkness must survive in daylight, in the ruins of a city whose population has dwindled to a few dangerous gangs. As the two are guided by Fade’s long-ago memories, they face dangers, and feelings, unlike any they’ve ever known.

*A copy was provided by Raincoast Books for review purposes*
This book, you love it, or you hate it. And then there’s me.

Enclave starts out as a very captivating, very exciting read. The world building is terrifying; we’ve got society living underground, talk of barren wastelands and acid rain “Topside”, beasts are roaming the tunnels which, let’s face it, are zombies. These “Freaks” eat human flesh, they smell and look like death, and they are taking over! I was lost and absorbed by this dreary desolation. Though what makes it the most compelling is the plausibility of this post-apocalyptic world. Society would separate, and there are apparently already people living in the underground NYC tunnels (as per the author’s notes). These types of post-apocalyptic settings are my favorites, the possibility makes it horrifying, and you all know by now that I’m a masochist. In the big picture, the world is brilliantly imagined, sharply described, and I loved it. I also loved the slow telling of its history. We don’t know what happened to bring about this future from page one, we learn it as our characters do. When you look at the world closer, however, mostly in regards to the underground living, I was a bit less convinced. How have they been getting drinkable running water for a century? Or I guess the best question to ask would be: How exactly have they survived? If you tell me you lived under the earth for over a century, you will need to give me the full lowdown to make me believe it. I wanted it to be more fleshed out.

The transition from underground to Topside is also a part I wish would have been done differently. Someone who has never been exposed to the sun would not so easily adapt to it. Sunglasses, conveniently found might I add, would not nearly be enough protection. I was expecting a bigger reaction overall, not just physically, but mentally as well. Nonetheless, I will say that the world we do get Topside is very well described in all its ravaged glory. The planet is destroyed and the author depicts its bleak nature very vividly.

On to the most controversial aspect of the novel. The characters in Enclave are very particular. They have an extremely different upbringing; Deuce was brought up as a fighter, a warrior, with “the strong survive” as her biggest value, so she lacks social skills including, and especially, empathy. The way she reacts to situations and other people’s distress is a source of complaint from many other reviewers and I can easily understand these reactions. Personally, I was able to do away with my own values to understand a culture that is completely unlike my own, but it does bring about harsh topics, such as rapes, that could very well leave a bad taste in your mouth. What I certainly could not stomach was when the arrow started pointing at an nauseating future love triangle – which I was confirmed does come about in the sequel. It’s not the triangle that I have the problem with, but the love interest involved in it. This is a guy who let his people gang-rape a girl continually, and who most probably raped girls himself even though it’s not specifically mentioned. He is a sick, vile man. While I understand the reasoning behind wanting him on board to help them survive until they reach their intended destination, I do not see myself garner anything but disgust in the possibility of a romance between our protagonist and this dirty, rotten fella. I just can’t. Will I still read the sequel knowing this? Certainly. The world building and overall premise is very enticing and I was thoroughly entertained from page 1. But I will also likely be annoyed and disgusted. I guess we can’t win em all.