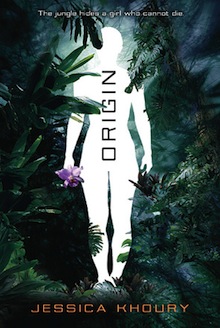 Pia has grown up in a secret laboratory hidden deep in the Amazon rain forest. She was raised by a team of scientists who have created her to be the start of a new immortal race. But on the night of her seventeenth birthday, Pia discovers a hole in the electric fence that surrounds her sterile home—and sneaks outside the compound for the first time in her life.

Free in the jungle, Pia meets Eio, a boy from a nearby village. Together, they embark on a race against time to discover the truth about Pia’s origin—a truth with deadly consequences that will change their lives forever.

*A copy was provided by Penguin Canada for review purposes*
Reminiscent of Lost, Origin takes place in the Amazon Rainforest where scientists are experimenting, and Pia is their most prized subject. Born and raised in a small secret village, Pia has never left the compound, has never seen anything other than the same old faces, the same old sterile labs and homes… until now.

Fascinating in itself, this story is told in a wonderfully vivid setting that sets the perfect mood for the reclusiveness of this secret scientific project. I can’t say that I’m very familiar with that part of the world, and I think this fact played a large part in how mesmerizing it was for me. Exotic animals, plants, and cultures create an atmosphere that is both unique and enchanting. The jungle is not just the setting, it’s an ambiance with sounds, smells, visualizations that come alive when you’re reading this book. Then, when you add hidden laboratories and secret experiments, it compels you even further. When I wasn’t immersed in the beauty of the Rainforest, I was contemplating the secrets and lies that run rampant within it. This encompasses immortality, science, magic, forbidden romance, betrayals, conspiracies, and evil plans, which are sure ways to create an exciting plot; Origin is definitely no exception.

Fast paced and energetic, the plot in Origin is set at just the right pace to keep you vigilant, while letting you absorb and savor the atmosphere. Pia, our protagonist, is a very peculiar character; her evident naiveté, lack of experience, and — surprisingly for someone immortal — vulnerability, would usually make for an unlikeable character, but because of her circumstance I found her quite compelling. Although I won’t admit to being completely in tune with her, she provoked a lot of wonderment and thought about her situation and what it would be like to know you will outlive everyone you love. Soon, she meets a native outside the fence – a boy named Eio (do not ask me to pronounce this, it sounds like I stubbed my toe O_O). Raised in the jungle, Eio is much more suited for the outdoors than Pia; he’s resourceful and strong. I liked him as a character. I didn’t find he and Pia had a whole lot of chemistry flowing between them, though. They develop a relationship that progresses fairly quickly; before I had time to register their attraction for each other, they were already falling in love. I never felt it, this alleged burning affection. Still, it was cute, it was definitely cute, maybe even sweet.

Overall, with an incredibly beautiful and imaginative setting, Origin’s enticing premise is sure to captivate fans of science fiction/fantasy. Plus, it’s all in a fabulous standalone self!