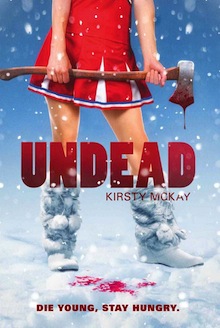 Out of sight, out of their minds: It’s a school-trip splatter fest and completely not cool when the other kids in her class go all braindead on new girl Bobby.

The day of the ski trip, when the bus comes to a stop at a roadside restaurant, everyone gets off and heads in for lunch. Everyone, that is, except Bobby, the new girl, who stays behind with rebel-without-a-clue Smitty.

Then hours pass. Snow piles up. Sun goes down. Bobby and Smitty start to flirt. Start to stress. Till finally they see the other kids stumbling back.

But they’ve changed. And not in a good way. Straight up, they’re zombies. So the wheels on the bus better go round and round freakin’ fast, because that’s the only thing keeping Bobby and Smitty from becoming their classmates’ next meal. It’s kill or be killed in these hunger games, heads are gonna roll, and homework is most definitely gonna be late.

*A copy was provided by Scholastic Inc. for review purposes*
What started off as a laugh-out-loud funny zombie book/parody, ends up losing its flair about half way through, when the humor turns from funny to exhausting. I can see this book garnering a certain fan base, especially those who get a kick out of B-rated horror films and parodies. To me it was just too… dumb. This book was dumb. I can’t lie.

When a school-trip zombifies, Bobby and a couple other fortunate classmates who are still alive, are trying to escape their friends who suddenly want to eat their faces. This book is definitely meant to be funny, even bizarre, and I did laugh quite a bit, especially at the beginning when Bobby’s sense of humor makes the best of things. I knew before going in that it wasn’t a serious zombie novel, I mean, just look at this cover, what I didn’t expect was the extent to which it would get ridiculous. I wanted to lay off the funny just a notch, and get some good story building at the very least to give the humor something to hang on to. For the most part, we go back and forth with no real goal or significance in the story, causing me to get restless and jittery, and eventually lethargic. The book zombiefied me! Bravo! Finally, when the plot got some traction, I was too anxious to get the book over with to enjoy the story developments that followed.

There are a lot of characters that come into play in this novel. Bobby being the narrator, we obviously get to know her the most. I did like her, but I also got irritated by her more than I can count, mostly because of her annoyingly flippant attitude about the situation. What I did like was her determination and take-charge attitude. She’s not one that needs a hand to hold. Along with Bobby, we meet a slew of “survivors” that I can’t say are very memorable. When a name was mentioned, I kept having to do a mental-check to recall who they were. This is the type of characterization that you come to expect from horror films, but in a book I like to get distinct personalities that I can get to know and care about, at least to some extent.

Also, for the love of god, zombies are called zombies, not zoms. *cries*

Will I tell you not to read this book? Not at all. It has tons of humor that ranges from hilarious to stupid to just plain ridiculous that I’m sure some people will enjoy. It will probably even gain its own cult following. But if you’re looking for any type of substance other than mindless entertainment, walk away, and let us never speak of this again.