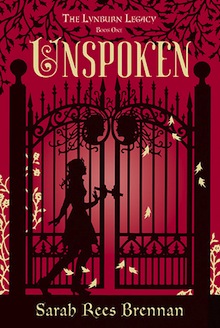 Kami Glass is in love with someone she’s never met—a boy she’s talked to in her head since she was born. This has made her an outsider in the sleepy English town of Sorry-in-the-Vale, but she has learned ways to turn that to her advantage. Her life seems to be in order, until disturbing events begin to occur. There has been screaming in the woods and the manor overlooking the town has lit up for the first time in 10 years. . . . The Lynburn family, who ruled the town a generation ago and who all left without warning, have returned. Now Kami can see that the town she has known and loved all her life is hiding a multitude of secrets—and a murderer. The key to it all just might be the boy in her head. The boy she thought was imaginary is real, and definitely and deliciously dangerous.

*A copy was provided by Random House Children’s Books for review purposes*
A tale filled with magic, thrill, romance, and charm, Unspoken is a unique Gothic mystery that, if only I could have clicked with its characters, I might have greatly enjoyed. And as I seem to be in the minority on this one, I think fans of Gothic novels should definitely give it a try as it does have good writing and a very creative concept.

While most of the Gothic novels I have come to love have been fairly slow paced – ie. The Book of Blood and Shadow and Long Lankin – I found that Unspoken did not convey quite enough of a Gothic atmosphere or creepy factor to make up for the slower development. It does start out with a very decent pace, but I found the first three quarters of the book is spent with Kami while she goes around gathering clues to find a killer, yet she’s too occupied with her complicated feelings towards Jared, sometimes Ash, to focus on finding answers. I’m sure if I would have been completely immersed in these characters and their unusual connection I would have found this a lot more compelling. Sadly none of these people really spoke to me, making the book feel very long winded. The off-putting dialogue, or maybe their bland personalities, halted me from developing any sort of connection with them.

With a British setting, we get interactions that are a little different than what you would expect in North America – or at least I was told lots of it were a part of the British culture. I could deal with the humor and wit – I actually quite enjoyed that aspect – but I could not get used to the flow of their conversations or the way they sometimes interacted with each other. Kami has an awkward personality, she talks very formally at times, making bizarre comments with strange conversational shifts that comes off as unnatural. For example, during a casual conversation she asks her date: “So… tell me about the difficulties in your family”. Who talks like this? I was hoping it would grow on me, but unfortunately it never did and I kept cringing whenever these people started conversing.

Even though the characters failed to entice me, the plot did give me a few chills and saved it from being a complete loss. We have a freaky manor, a strange family who everyone seems to be terrified of, and a town full of secrets. Plus, Kami has been talking to a voice in her head her whole life. Is he real? Or is she crazy? Being right up my alley, this setting easily grabbed me from the first page. If it wasn’t for the slow, romantically inclined telling, it could have easily become a 5-star favorite. When we do get some answers there are a lot of unexpected turns that I would not have predicted. However, when it came to the big climactic ending – the reveal of the killer – I had already been suspecting this person for a while so it came as no surprise for me, thus negatively affecting the intended impact. The events following this up to the ending were at least a little more unforeseeable, closing on a surprising note that makes me curious for book 2 regardless of my qualms.

Unspoken is a creepy and quirky read that has a lot of potential to garner fans who will absolutely fall for it. Unfortunately I wasn’t quite as impressed as many others; when I don’t care about the characters, it’s hard to care for the rest, but I still found it to be an OK read.