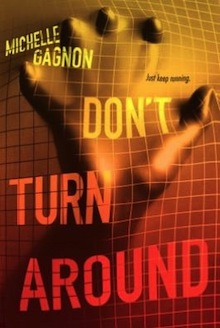 Sixteen-year-old Noa has been a victim of the system ever since her parents died. Now living off the grid and trusting no one, she uses her computer-hacking skills to stay safely anonymous and alone. But when she wakes up on a table in an empty warehouse with an IV in her arm and no memory of how she got there, Noa starts to wish she had someone on her side.

Enter Peter Gregory. A rich kid and the leader of a hacker alliance, Peter needs people with Noa’s talents on his team. Especially after a shady corporation threatens his life. But what Noa and Peter don’t realize is that Noa holds the key to a terrible secret, and there are those who’d stop at nothing to silence her for good.

*A copy was provided by HarperCollins for review purposes*
Wildly exciting with never ending action, Don’t Turn Around is perfect for fans of Lisbeth Salander and Bourne Identity.

With a bang, we begin this fast paced, nail biting thriller that takes us inside a story filled with conspiracies and lies, and how two hackers are gunning for the truth. If you’re looking for a high-action plot you’re definitely at the right place. There is no room to breathe in this novel, let alone relax. It begins and ends with your adrenaline pumping. It’s exciting; keeping me up reading late at night, though it does have a few quirks that holds it back from becoming a truly amazing read. Like character development.

First we meet Lisbeth Noa who has hacked herself into an independent life to escape the evils of foster care. I liked her instantly. Although not as mentally messed up, nor as characteristically fleshed out, Noa’s hacking and resourcefulness reminded me quite a bit of Lisbeth Salander from The Girl with the Dragon Tattoo. Greater development would have helped make her a more memorable characters like our dear Lisbeth, but I did enjoy her nonetheless. Noa’s foster care upbringing was not ideal, so what we do get is an apprehensive, keep-to-oneself, young woman who is just now starting to let people in. Thus, we do still glimpse at who she is at large, and for a first book in a series with so much happening, lack of greater depth is not a very prominent issue. At least, it didn’t stop me from absolutely devouring this novel! Alongside Noa, we’re introduced to Peter who is vastly different from her if only for the fact that he grew up in a rich household, and with parents who seem to have gotten way over their heads into something abysmal. I found Peter’s character to be even less established than Noa’s, never quite getting a feel of who this kid is except a hacker. I still found his voice fairly easy to like.

With dual gender POVs some of you may expect a romance, so let me tell you that this book does not have a romantic subplot, which didn’t bother me in the least as I felt it wouldn’t be a good fit for this story in any case. Still, the author tries to work a tiny bit of romance in the plot which, as the novel fails to bring forth any chemistry between the characters beyond a mere acquaintance relationship, I found these instances quite awkward and out of place. I think I will be disappointed if any romantic relationship does germinate between them in the future. They make a great team as hackers, romance doesn’t always need to pop it’s head – especially when it’s ugly.

As others have mentioned, I do agree that we’re left with an abundance of questions when the book ends. We do amass some details throughout the book relating to the major plot points, but we only merely scratch the surface, leaving a mountain to discover in the next installments. I’m particularly interested in digging deeper inside the medical side of the plot; a new terrible disease that targets teenagers is just what I need to quench my thirst for some terrifying mutated illnesses that kills. What? Is this a weird fetish?

With its freaky, creepy cover, I highly recommend Don’t Turn Around for readers who enjoy action packed, incredibly fast paced thrillers that include fascinating medical evolution and research.

30 Responses to “Review:Don’t Turn Around by Michelle Gagnon”