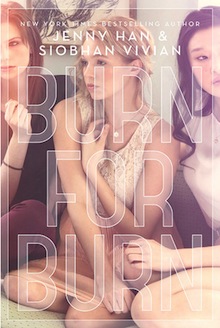 BIG GIRLS DON’T CRY… THEY GET EVEN.

Lillia has never had any problems dealing with boys who like her. Not until this summer, when one went too far. No way will she let the same thing happen to her little sister.

Kat is tired of the rumours, the insults, the cruel jokes. It all goes back to one person– her ex-best friend– and she’s ready to make her pay.

Four years ago, Mary left Jar Island because of a boy. But she’s not the same girl anymore. And she’s ready to prove it to him.

Three very different girls who want the same thing: sweet, sweet revenge. And they won’t stop until they each had a taste.

*A copy was provided by Simon & Schuster Canada for review purposes*

Sorry Karma, we’re taking things into our own hands! Kat, Mary, and Lillia are out for revenge. These three incredibly different girls – both in personality and social status – help each other right some wrongs. A great balance of friendship, drama, and intrigue; Burn for Burn is full of entertainment value, and high in sass!

The girls: We’ve got three convincing voices made up of three distinctive personalities. In a style that will appeal to fans of The Sisterhood of the Traveling Pants, we switch from one POV to the other, making us understand these girls individually, in a personal manner, in addition to what led to them wanting to seek revenge. Even though they aren’t all sweet and delightful, or even likeable in one case, I found them all remarkably enticing. They have such strong characters that breathe life into the story, each giving it different dashes of charm – and attitude. They’re also paired with a fantastic cast of side characters who constantly keep you on the fence, not knowing if you should like them, or hate them.

Revenge is sweet? These girls are definitely finding out. At first I thought the revenge acts were a tad lame. I actually felt sympathy for the first victim as I didn’t find he was all that deserving, and the acts themselves were a bit too personal for my taste. However, as we move on to the other two sorry souls, the acts get much more consequential, on top of being a great deal more justifiable. Not that I condone what they’re doing, but I can at least see why they thought it was warranted. They soon learn, however, that with every act of vengeance, you have to deal with the consequences.

What I wasn’t expecting from this novel was the hint of something paranormal. I was thrown off at first, wondering where it may lead up to, though by the end I was highly intrigued. We only get glimpses; it’s not a monumental part of the story for the most part, keeping the novel almost completely contemporary, but eventually, this small paranormal aspect evolves until it completely changes one whole aspect of the plot. And to be honest I kind of loved it! I’m very excited to find out more about this mysterious side that unexpectedly reminded me of one of my favorite horror movies. Expect to be highly anticipating its sequel after this crazy cliffhanger ending!

Burn for Burn is like a guilty pleasure; you should know better, but you’re secretly enthused by the anticipation of seeing these people get what’s coming for them. Han and Vivian’s writing styles blends flawlessly together, leaving us with an enchanting story full of energy and spice.

37 Responses to “Review: Burn for Burn”