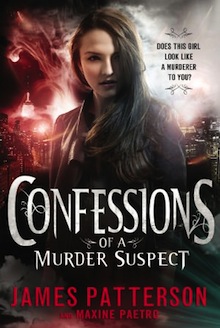 On the night Malcolm and Maud Angel are murdered, Tandy Angel knows just three things: 1) She was the last person to see her parents alive. 2) The police have no suspects besides Tandy and her three siblings. 3) She can’t trust anyone–maybe not even herself. Having grown up under Malcolm and Maud’s intense perfectionist demands, no child comes away undamaged. Tandy decides that she will have to clear the family name, but digging deeper into her powerful parents’ affairs is a dangerous-and revealing-game. Who knows what the Angels are truly capable of?

*A copy was provided by Hachette Book Group Canada for review purposes*
As an avid reader I’ve obviously been familiar with James Patterson, but I had yet to try one of his books. I decided to take the plunge with this new one of his that lured with me talks of dark secrets, murders, and teen detectives. While I can’t compare it with his other works, I ended up feeling very satisfied with it. He has an easy to read writing style with incredibly short chapters that makes it almost impossible to put it down since “Just one more chapter” would only take another few minutes (or seconds in some cases).

What I noticed and found uniquely compelling right away, is how the narrator –Tandy–talks directly to us–the reader. It feel very personal; she’s addressing me and telling me her story. I understood and cared for her more than I would have otherwise, I’m certain, seeing how eccentric she is. Because this family, they’re… special. In every sense of the word. Their parents–before they were found dead, that is–brings discipline to a whole new level; punishments take the form of standing on one’s head reciting landmarks in Bhutan… in the Dzongkha national language. Yeah… anyone? Then, we have a whole troupe of brothers and sisters who seem to be a little too smart, too strong, too robotic, adding in a mystery of what the heck they are. Anger issues also makes appearances, turning every single one of these family members a suspect. If this isn’t enough, the drama they’re involved in belongs on some mutated Jerry Springer episode. Entertainment? Check!

Entertainment and mystery goes hand in hand in James Patterson’s newest series. Confessions of a Murder Suspect, as the name entails, deals with a murder first hand, but it also involves mysteries regarding the family’s past, their parents dealings, in addition to a few others that makes its appearance within this novel, to be looked into further in the next installments. I had a great time making up theories, trying to figure out what kind of freaky skeletons were in their closets. While I found some parts fascinating, I can’t say the big reveal at the end was especially mind blowing. After speculating wildly on their parents murders, what actually happened is a little… unexciting, but I can’t say it was a complete let down either. For a quick, fun read, I was kept thoroughly entertained from start to finish and that’s exactly what I was hoping for when I turned the first page of this novel. After everything, an astonishing ending would have simply been the icing on the cake, so it’s a little unfortunate, but it’s not a deal breaker.

Peculiar family dynamics, unusual characters, and intriguing mysteries turn this book into a fun filled, exceptionally quick read. I am off to order James’ first Maximum Ride novel as we speak!

27 Responses to “Review: Confessions of a Murder Suspect”