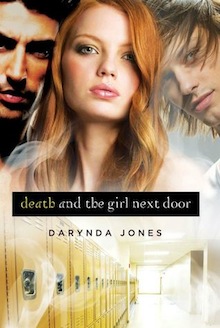 Ten years ago, Lorelei’s parents disappeared without a trace.  Raised by her grandparents and leaning on the support of her best friends, Lorelei is finally beginning to accept the fact that her parents are never coming home.  For Lorelei, life goes on.

High school is not quite as painful as she thinks it will be, and things are as normal as they can be.  Until the day the school’s designated loner, Cameron Lusk, begins to stalk her, turning up where she least expects it,  standing outside her house in the dark, night after night.  Things get even more complicated when a new guy—terrifying, tough, sexy Jared Kovach—comes to school.  Cameron and Jared instantly despise each other and Lorelei seems to be the reason for their animosity.  What does Jared know about her parents?  Why does Cameron tell Jared he can’t have Lorelei?  And what will any of them do when Death comes knocking for real?

*A copy was provided by Macmillan for review purposes*
I became a big fan of Darynda Jones when I read her adult series that proceeded to make me giggle spontaneously for days. Hearing about her new YA novel, Death and the Girl Next Door, prompted a lot of squealing. Within the first 20 pages, I already had taken note of a handful of awesome quotable lines; I knew I was in for a good time!

Lorelei’s parents have mysteriously disappeared, and now she seems to have a stalker… or two. Lorelei, as I already expected from Darynda’s characters, is witty and smart, and she can hold her own, which is always a plus to create a character that is easy to root for. She also has two fabulous best friends who are lively, supportive, and provide us with plenty of humoristic banter. Now the boys… Cameron and Jared – both hot, both uniquely compelling, both defensive towards Lorelei. Who else automatically thinks Love Triangle? You don’t have anything to worry about, however, this book is actually void of any love triangle. Regardless if this is good news to you or not, you can look forward to a sexy, steamy, and swoon-worthy romance.

These boys are not without secrets. Once we get a glimpse at what Jared’s powers are, a gazillion questions arise: About his abilities, Cameron’s strong dislike towards him – basically, just what the heck is happening. I found it exceedingly interesting, unquestionably original, but I was dying for answers; it takes a while before details are finally given up. I was expecting Lorelei, when observing a very surreal scene, to scream for answers, no, demand answers. She doesn’t, which was surprising for her character and a little frustrating. She was obviously in some sort of shock and worrying about the boy’s injuries, but I still felt like the information was being dragged out needlessly. Cameron makes a huge deal about how Jared does not belong here and is dangerous, he also keeps calling him an “it”, yet he refuses to answer any questions. You know, like someone who shows off that they’re “in the know” and you’re not. Maybe I’m simply too impatient, but this is how it came off.

When we eventually get the inside scoop, we’ve got an incredibly unique spin on death, the angel of death, and how Lorelei fits into all of this. Knowing the theme of the plot, there is some mention of God and religion but it’s kept light and pertinent to the story. This is all followed by thrilling twists and turns, one in particular I found myself stupefied by how awesome and fascinating it was. It’s also one that I look forward to exploring in the following installment, which promises to be positively exciting.

Entertaining, unique, and down-right sexy, Death and the Girl Next Door is an absolute must read! The characters are convincing, their relationships and surroundings are realistic, and the parents are present – which I was particularly pleased with. It’s not as persistently sarcastic as her adult series, but there’s plenty of humoristic, sassy dialogue. For Darynda’s first foray in the Young Adult genre I was very satisfied and I’m convinced that fans will undoubtedly enjoy it.

29 Responses to “Review: Death and the Girl Next Door”