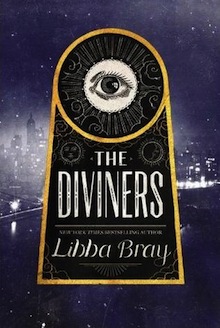 Evie O’Neill has been exiled from her boring old hometown and shipped off to the bustling streets of New York City–and she is pos-i-toot-ly thrilled. New York is the city of speakeasies, shopping, and movie palaces! Soon enough, Evie is running with glamorous Ziegfield girls and rakish pickpockets. The only catch is Evie has to live with her Uncle Will, curator of The Museum of American Folklore, Superstition, and the Occult–also known as “The Museum of the Creepy Crawlies.”

When a rash of occult-based murders comes to light, Evie and her uncle are right in the thick of the investigation. And through it all, Evie has a secret: a mysterious power that could help catch the killer–if he doesn’t catch her first.

Phew. Finishing this book feels like an achievement. At a whopping 600 pages, The Diviners is a an exercise in arm strength to simply read it, but it’s absolutely worth it. Work those arms people! Historical novels not being my thing, I was a bit concerned that I was getting into a monster of a book that would bore me to death. I had nothing to worry about, however, when only with a few mere pages, Libba had created an intensely creepy and atmospheric setting that promised to disturb, to captivate, and to enchant me for pages and pages and pages and pages to come.

This book is creepy to the nth degree. It sent chills up my spine and kept them there from start to finish. The setting being the main reason for the perpetual eerie feeling. The fact that it’s a historical is actually what I ended up enjoying the most about the setting, which really surprises me. Dealing with an age old serial killer and an ancient sinister mansion that becomes a character in and of itself, the fact that the book is set in an age where religion is rampant, and technology is, well… not, makes it all the more poignant. Cults, rituals, demonic presences, it’s simply not something we hear much about in modern times, yet it’s so much more eerie; so much more disturbing than any horror movie with flashy effects we have nowadays. I guess haunted houses were scarier when you couldn’t Facebook about it.

Libba’s immaculate writing style also plays a big hand in the exquisite atmosphere this novel dishes out. Everything is tremendously vivid; I could feel the wind passing through to settle in this creaky house, I could picture New York City in all its 1920s glory – the theatre, the speakeasies, everything -, I was taken by the fabulously old school language to a time before I was even put on this earth, yet it was as if I had been there. Then, we weave in a cast of characters that is so full of life with spunk and energy. Really, it’s a work of art!

Witty, snarky, and pos-i-tute-ly charming, Evie is a wonderful protagonist; a perfection for this type of novel. The book is clearly very long. It’s filled with literary and cultural references, and can be slow paced at first while it begins to carefully weave in infinite substance until it’s exploding with facts, details, and fascinating story lines. It can be hard to take all of this in, especially if you’re not big on historicals like myself – I did have to take a break for a couple of days to read something a little bit more easier on the intellect – but when you mix in Evie’s large personality, you won’t be able to get enough of her! She lightens up the air perfectly. We get a dash of humor, some amusing banter, and a personality that makes her thoroughly loveable. She softens this sometimes weighty novel quite marvelously.

After not being a fan of her Gemma Doyle series when I tried to read it years ago, I am happy that I was not disappointed with this one. In fact, it quite exceeded my personal expectations of it. I think those with a passion for historical mysteries and paranormal horrors will definitely be thrilled to find everything they’re looking for, and more, inside The Diviners.

US vs UK Cover

32 Responses to “Review: The Diviners by Libba Bray”