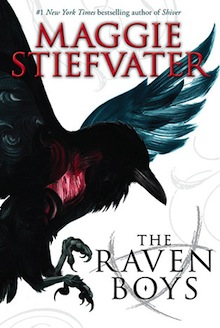 “There are only two reasons a non-seer would see a spirit on St. Mark’s Eve,” Neeve said. “Either you’re his true love . . . or you killed him.”

It is freezing in the churchyard, even before the dead arrive.

Every year, Blue Sargent stands next to her clairvoyant mother as the soon-to-be dead walk past. Blue herself never sees them—not until this year, when a boy emerges from the dark and speaks directly to her.

His name is Gansey, and Blue soon discovers that he is a rich student at Aglionby, the local private school. Blue has a policy of staying away from Aglionby boys. Known as Raven Boys, they can only mean trouble.

But Blue is drawn to Gansey, in a way she can’t entirely explain. He has it all—family money, good looks, devoted friends—but he’s looking for much more than that. He is on a quest that has encompassed three other Raven Boys: Adam, the scholarship student who resents all the privilege around him; Ronan, the fierce soul who ranges from anger to despair; and Noah, the taciturn watcher of the four, who notices many things but says very little.

For as long as she can remember, Blue has been warned that she will cause her true love to die. She never thought this would be a problem. But now, as her life becomes caught up in the strange and sinister world of the Raven Boys, she’s not so sure anymore.

*A copy was provided by Scholastic Canada for review purposes*
The synopsis for The Raven Boys is what first attracted me to this novel. A girl from a clairvoyant family who sees her first “soon-to-be-dead” ghost, the ghost of a boy who is currently a high school student, the ghost of a boy who she can’t fall in love with. Because she’s pretty sure what kills him is their first kiss. I know! This sounds exactly like a book for me. I was highly intrigued by this premise and especially excited by all the wonderful reviews it has gotten thus far, but I soon came to realize that the plot had very little to do with what this synopsis describes, and more to do with a hunt for an ancient king who will grant a favor to the one who wakes him. Yes, ladies and gentlemen, we are looking… for a genie.

Sure, I can certainly get with this unexpected plot and I still kept my hopes up that it would wow me. Involving energy ley lines also definitely brings about very bizarre and somewhat perplexing turns in the book that I found especially fascinating. Mostly, it’s the way the story is told that kept me from becoming enamored like so many others. As in Maggie’s The Scorpio Races, I think the writing style in The Raven Boys will be a hit or miss. After quite enjoying her easily readable Shiver series, I was not expecting the complexity in which this one is delivered. It’s a novel that has a lot of drawn out descriptions and frequent back-stories. I can see readers who enjoy this type of telling would love it, I’ve often loved books of this nature myself–when I’m expecting it–but in this case, I found it disrupted the flow of the story. When we stopped a conversation, or worse, an exciting scene, to get an abundance of details on the surroundings or past events, my mind would start to wander off and I would have a hard time getting back into it. Let’s just say it took me a while to finish this one.

The Raven Boys is filled with intriguing characters. We have a lot of very distinguished, very unique personalities. However, with such an abundance of characters it can take a while to situate yourself inside their lives. It took me a good part of the first half of this book (well over 100 pages) until I was confident I knew who was who, what relationships they had with each others, and how they fit in the story. Also, with so many people to keep track of, I can’t say I was especially in tuned with any of them; I never quite got to identify with them emotionally. Nonetheless, I did enjoy the closeness they all seem to share with one another. Every character has their own quirks, their own bizarre traits that make them genuine. I may not have felt a deep character connection, but I certainly did enjoy the personalities I got to meet.

This book is clearly very unique and filled with twists that I found highly interesting. I was hoping for some more answers in the end; we don’t make very much progress in terms of the plot, nor the romance. So, yes, I was a little bit disappointed that I didn’t share the enthusiasm of so many of my fellow readers on this one, but I wouldn’t say I didn’t like it, either. The writing style is what put me off the most and since it doesn’t seem to be a problem for many others, it seems to be one of those books you have to try for yourself.

41 Responses to “Review: The Raven Boys”