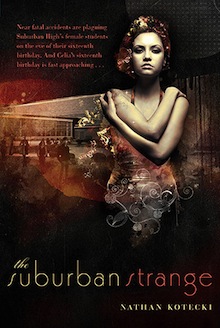 Shy Celia Balaustine is new to Suburban High, but a mysterious group of sophomores called the Rosary has befriended her. Friends aside, Celia soon discovers something is not quite right at Suburban. Girls at the school begin having near-fatal accidents on the eve of their sixteenth birthdays. Who is causing the accidents, and why? As Celia’s own birthday approaches, she is inexorably drawn into an underground conflict between good and evil—the Kind and the Unkind—that bubbles beneath Suburban High.

Mysterious accidents the day before girls turn 16, a peculiar group of socialites, a unique paranormal aspect – The Suburban Strange was very promising. It started very intriguing too, with a very sophisticated, high-on-life feel that I found quite refreshing, though my excitement for it came to an quick halt when this high school clique started sounding like 100 year old teenagers, and the cultural references in the book were more persistent than door to door salesmen. Among other things.

A group of worldly teens spending their time in an underground indie bar scene creates a very sophisticated, hipster vibe in this book that I initially found very refreshing. We get teenagers who like to dress to the nines and act like they’re older, more cultured than the average. I liked the attitudes and personalities that it brought out in the book. However, after a while, I’m not sure if it got progressively worse, or if I simply got over my initial enchantment with it, but it became a little too unnatural for me to picture actual teenagers talking and acting like this. I’m certain there must be some in the world that share these personalities, but I was put off by it come half way through. I was also disappointed that their strange behaviour was not linked to the mysterious happenings in the plot which is what I initially assumed. I was expecting them to really be 300 year old demons or vampires – anything but extreme hipsters who are simply just… weird kids.

Have any of you read The Awakening by Kate Chopin? I hadn’t heard of it until this book. It’s apparently a classic, and if the meh reviews on Goodreads hadn’t put me off it, hearing about it 8271362153 times in this book would make it certain that I never want to hear about it ever again. I don’t mind cultural references in a novel, in fact I often find them very enjoyable, Gilmore Girls is one of my all time favourite TV shows because of the infinite cultural references–among other things–, but when a conversation unnaturally halts so the protagonist can fangirl for the 3rd time about a book she just read, it becomes grating. Especially when combined with the already considerable music and art references scattered throughout.

Instead of focusing on these grandpa teens with a marketing agenda, I decided to let myself enjoy the plot which I found fairly interesting and unique. I liked how the paranormal aspect was woven into the plot. While it didn’t go into great lengths, the Kind and Unkind mythology is a creative concept of good vs evil. There is one aspect of it that I found a bit obscure as I’m not sure of its purpose or relation to the plot: the fact that only girls who are virgins become a victim of this pre-birthday curse. Is it supposed to add relatable teenage dilemmas in the plot? I’m not quite sure but it felt very backwards 80s horror movie with no real significance. Then when it came time to the final twist–the big reveal–I realized just how predictable it all was. Even my two year old son knew who did it. And he thinks B comes first.

I was expecting a fun mystery with creepy happenings and an eerie school setting, instead I got a very slow paced read that was more an exposition on teenage social influences and common peer pressures than anything. I would only recommend this if you love books filled to the brim with very obscure indie music and art references, drab teenage “messages”, and unusually sophisticated teenage characters.

28 Responses to “Review: The Suburban Strange”