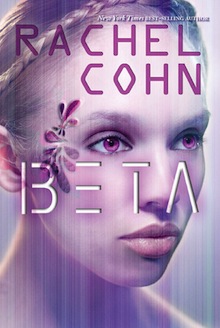 Elysia is created in a laboratory, born as a sixteen-year-old girl, an empty vessel with no life experience to draw from. She is a Beta, an experimental model of a teenage clone. She was replicated from another teenage girl, who had to die in order for Elysia to exist.

Elysia’s purpose is to serve the inhabitants of Demesne, an island paradise for the wealthiest people on earth. Everything about Demesne is bioengineered for perfection. Even the air induces a strange, euphoric high, which only the island’s workers–soulless clones like Elysia–are immune to.
At first, Elysia’s life is idyllic and pampered. But she soon sees that Demesne’s human residents, who should want for nothing, yearn. But for what, exactly? She also comes to realize that beneath the island’s flawless exterior, there is an under-current of discontent among Demesne’s worker clones. She knows she is soulless and cannot feel and should not care–so why are overpowering sensations cloud-ing Elysia’s mind?

If anyone discovers that Elysia isn’t the unfeeling clone she must pretend to be, she will suffer a fate too terrible to imagine. When her one chance at happi-ness is ripped away with breathtaking cruelty, emotions she’s always had but never understood are unleashed. As rage, terror, and desire threaten to overwhelm her, Elysia must find the will to survive.

*A copy was provided by Disney Hyperion for review purposes*
While Beta has a fascinating premise of clones in a perfect world, there are a lot of elements in the plot that I found either unnecessary, or very off-putting. At first I thought I could overlook these qualms, but they kept piling up on top of one another until it toppled and became too much for my taste. The ending, however, almost brought this to a 3-stars as it actually caught me off guard for once. I would never have expected it–though this may not be the case for everyone–and it makes me somewhat curious about the sequel. Could other readers enjoy this one? Most definitely. If constant drug use – by adults and teens -, rapes, and slavery bothers you, however I suggest you avoid it.

Beta’s world building is depicted very slow and elaborately, filled with long descriptions of the pretty, perfect island they’re residing on. I enjoyed this at first as it creates a wonderful, scenic portrayal of Demesne, though after a while I found myself skipping these winded paragraphs as they began to simply bog down the plot. It was not long before I was yearning for more technical world building with all this imagery. Cloning being a very fascinating matter, we’re not told nearly enough to convince me of its logic in this case; why a deceased body is needed in the first place. Then comes the addition of souls into the matter which only amounted to making me uncomfortable as I’m not sure where I stand on this way of thinking. This is the downside of adding a spiritual angle as a means of explanation–not everyone will share the beliefs, or be open to it. If one lives and breathes, how can they not have souls? Or if, like me, you take a more scientific approach, it all comes to matter and energy, therefore, if a body has a source of energy–aka life–you’d have to mess with brain function to make someone have no desire or taste. It all comes down to realism, and how much you need to suspend disbelief. Maybe my head’s too thick, or maybe–and this is the story I’m going with–I’m simply too smart for this book! Ha!

All of this is not helped with the very slow pace of the book where more often than not, I was going over the logic of the story, scrutinizing it. In addition, as it takes a long while for the plot to make its appearance, we’re left in the midst of winded historical happenings and flat character dynamics. Elysia’s character–the Beta–starts off likeable with a fun narration since she doesn’t know a lot about society. This all goes downhill after she meets Tahir, the love interest. What follows is a dispassionate romance and bizarre unraveling events that leave our protagonist erratic and rash. One could argue that her behavior is purposefully written as such for she is a dysfunctional clone, yet, her awareness and thought process is inconsistent with this theory. In the end, she simply failed to charm me. So did any and all of the supporting roles. There was a lack of heart in each of the characters, because of which they fell flat.

Having a lot of controversial subjects could make this a very hit or miss novel. The plot basically consists of buying clones for slavery. Even though these are supposedly unfeeling, no souls clones, their treatments as objects–accessories to flaunt and play with that includes sexual activity (or assault depending how you look at it)–did not sit well with me. If a clone is found to have human traits such as taste, emotion, or otherwise, they are tortured and killed. Why? For research of course… Furthermore, throughout the novel there is constant talk of “raxia”, the apparent drug of choice for almost all residents of this perfect utopia. This drug–which is never particularly described–is used recreationally, regularly, and mentioned constantly. I still don’t understand the need for this to have been included in the book at all. It adds nothing, neither entertainment nor substance, to the story.

As a shell, this book has great potential with its unique, exciting premise. Inside this shell, however, is whole slew of problems that go from mild to simply asking for trouble. I’m not sure who I would recommend this book to, but it would definitely need to be someone with an open mind. It does have a flair of eccentricity and exciting dramatics that I could see readers enjoy, so I will leave this up to you.