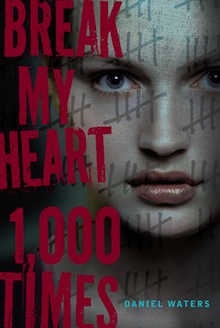 Living in the aftermath of the Event means that seeing the dead is now a part of life, but Veronica wishes that the ghosts would just move on. Instead, the ghosts aren’t disappearing–they’re gaining power.

When Veronica and her friend, Kirk, decide to investigate why, they stumble upon a more sinister plot than they ever could have imagined. One of Veronica’s high school teachers is crippled by the fact that his dead daughter has never returned as a ghost, and he’s haunted by the possibility that she’s waiting to reappear within a fresh body. Veronica seems like the perfect host. And even if he’s wrong, what’s the harm in creating one more ghost?

*A copy was provided by Disney Hyperion for review purposes*

When you open a book, usually within 40-50 pages in you start getting a good perception of the plot and what direction it will lead you; this was the downfall of Break My Heart, 1000 Times. It began on a very high note, the premise is incredibly unique and interesting. I love ghost stories and this one was particularly different, cool even. I was expecting the plot to bring us into the story of this post-Event world, to explain how the ghosts are there, and become a little like a post apocalyptic novel where ghosts are the villain. This was not the case. Not only do we not find out anything about this Event whatsoever, the story is more of a serial killer novel – one where we know the identity of the killer from the start, which is not nearly as fun.

I will say, creativity is definitely apparent in the plot. We have a world where something caused ghosts to suddenly become a daily occurrence, a normality even. Plus, one of the POVs in the book is one of the ghosts – one of the few who is conscious of it, not just a recurring image or memory like most seem to be. This is the part that I enjoyed the most. It’s a fascinating new way of life: to have ghosts appear in your classroom and not be phased by it very much. I was clearly hoping for a lot more backstory. What was this Event exactly? This question is brought up during the first few pages, without ever getting an answer.

Up until halfway through, I can say I was really enjoying it, being kept enchanted by the neat story. However, when a certain romance begins and our main character turns incredibly moody, it went downhill fast for me. I realized I was not particularly impressed with any of the characters. The protagonist, Veronica, never made me understand her. She’s very one dimensional and I did not like her attitude at all. She gets incredibly pissed–to the point of slapping her boyfriend–because he did not pick her up after work. Fits like this annoy me, teenager or not. Their romance gave me a very weird vibe from the beginning, as well. It’s hard to even pinpoint why, I just found them really awkward together. Then there’s the inclusion of two strange not-really-love-triangles, where it seems one was only included to add in a fight between the two guys, then to never hear of the first guy again except for a random scene near the end, and the other was just… bizarre.

No backstory? Fine. I can absolutely get with a great serial killer story. It has a good plot overall; I found the motive especially intriguing. Told in several perspectives, we have the ghost, Veronica, and the killer, which is her English teacher (and this is not a spoiler). Since we get these POVs, we already know who the killer is from the get go, and we’re simply along for the ride while the characters are blind to the danger that they’re in. Preferring my killer mysteries to be, well, mysteries, I didn’t find this one especially captivating. It made it highly predictable as well.

Clearly, I was expecting something much different than what I got. Still, it’s unique with a really interesting premise, so I would not go and say it’s terrible. It was mostly the characters that did not compel me. My heart wasn’t into it, turning what could have been a very good book into a mediocre read.