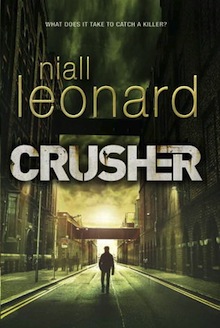 The day Finn Maguire discovers his dad bludgeoned to death in a pool of blood, his dreary life is turned upside down. Prime suspect in his father’s murder, Finn must race against time to clear his name and find out who hated his dad enough to kill him.

Scouring the sordid, brutal London underworld for answers, exposing dark family secrets, and facing danger at every turn, Finn is about to learn that it’s the people you trust who can hit you the hardest…

When I first heard or Crusher I had never heard of it or of the author before, and when looking deeper into it I was surprised to find out the author is actually EL James’ (50 Shades) husband. This left me both intrigued and worried. Having been put off of 50 Shades simply from excerpts that made me cringe, I was hoping Niall would be able to create a story that was compelling and exciting, and hopefully void of bizarre tampon scenes.

Well, I can assure you there are, in fact, no tampons! A big reason *could be* probably because our main character is male. Finn comes home to find him father dead one evening, after the cops make him a suspect, he decides to take matters into his own hand and find his father’s killer. This promises a heck of a lot of excitement, great action, and hopefully some awesome twists. To my great disappointment it did not deliver in either of these points.

Unless… unless you call Finn working, then working again, then getting fired, then working. Oh wait, it’s a little exciting when he breaks into some crime boss’s yard, but that doesn’t last very long and he’s working again. Washing dishes! All that steam! That hot, sweaty dishwasher! Yeah… no. Not exciting. When he isn’t working, he’s planning his father’s funeral. Talking to funeral directors. Funeral arrangement… very sexy… Then wait, Finn trips, and oops, he stumbles on a trail to his father’s killer! That was so convenient!

Let’s just say, I did not find this very exciting. In case some of your are a little on the slow side.

The investigation itself involves a crime lord of some type, clues that seem to appear out of sheer luck more than anything, and a whole slew of stereotypical characters that felt like cardboard cut outs of any crime movie. Digging in clues is what’s the most fun in a crime novel. You go along with the characters and try to figure out what happened. The way Niall goes about clues and twists are too coincidental to make it really captivating. Moreover, there’s never any real feeling of danger or suspense. Instead of being scared, I was baffled by the characters’ actions. Stupidity will never be suspenseful, only irritating, and slightly amazing.

So why did I give this book 2-stars? Well, I finished it. It kept my interest; I was hoping it would eventually get thrilling, and I was kept curious throughout, wanting to know who the killer was. So it is a decent premise, with an interesting male protagonist who could have a lot of depth if the author gave him a likeable personality, or any personality at all to be honest. The lack of consistency in the writing and sporadic pacing clearly killed the whole plot for me. But hey, why don’t you try it out? *hands over book forcefully*