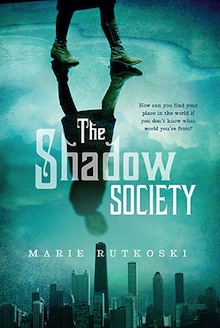 Darcy Jones doesn’t remember anything before the day she was abandoned as a child outside a Chicago firehouse. She has never really belonged anywhere—but she couldn’t have guessed that she comes from an alternate world where the Great Chicago Fire didn’t happen and deadly creatures called Shades terrorize the human population.

Memories begin to haunt Darcy when a new boy arrives at her high school, and he makes her feel both desire and desired in a way she hadn’t thought possible. But Conn’s interest in her is confusing. It doesn’t line up with the way he first looked at her.

As if she were his enemy.

When Conn betrays Darcy, she realizes that she can’t rely on anything—not herself, not the laws of nature, and certainly not him. Darcy decides to infiltrate the Shadow Society and uncover the Shades’ latest terrorist plot. What she finds out will change her world forever . . .

The Shadow Society begins on a very clichéd note: hot new guy who our protagonist is immediately attracted to, who invades all her thoughts, and seems to be enchanted by her–the plain Jane. Let’s just say I did not have high hopes after this. But fortunately, and as a big relief, things turn around quite drastically once we get over this beginning slump. This is when we find ourselves into a very intriguing and unique premise involving alternate dimensions.

Alternate dimensions are not something I have often come upon in YA, I love the concept, it’s brimming with endless possibilities. This is what I enjoyed the most in this novel. The concept is well done, there are some holes–mostly grey areas–but I found it quite fascinating overall. The explanation that caused the dimensional divide is both scary and thought provoking, and the differences between the two are as vast as I like to imagine they would be–butterfly effect and all. Furthermore, Marie created this new world with a lot of details and cinematic descriptions that had me easily portraying this alternate Chicago. It’s beautiful and dangerous. The notion of shades is so very neat as well–how they live, what they can do, how they’re considered evil and a thing to fear. Being able to disappear… who hasn’t thought of that at least once? After gaining this knowledge about this world so unlike our own, we get an explanation for the stale beginning which gets us to understand Conn’s initial attitude towards Darcy, changing my opinion of it all for the better.

The story follows Darcy quite closely, there are some secondary characters, but other than the two love interests that forms our cliché triangle (we couldn’t get away from them all), there aren’t a whole lot of secondary character interaction–which is a shame because the ones we do meet briefly are a memorable bunch. At least, Darcy leads the show very well. I liked her personality. She’s flawed, and she makes mistakes, but she’s not oblivious to them. Her relationship with Conn is actually built, not born from passion and lust. This is partly due to Conn himself. I was never too sure where he stood. His character is intricate; he wants to be loyal and true, but to whom? Him being any kind of relationship with a shade is a definite unusual and strongly frowned upon idea, seeing as they’re the enemy race. Although there wasn’t a strong “forbidden love” tone I usually like from these romances, I thought their relationship growth was realistic, and perfectly combined with an obvious connection.

After the not so exciting beginning, I’m happy to have found the book well paced. There is a ton going on once they arrive in the alternate world, from spying, to learning newly discovered ghosting abilities, to researching forgotten past; I was kept thoroughly entertained. The anti-climatic ending was a tad disappointing, though. The resolve was too easy for my taste, with some conveniences that were a little… implausible.

It’s not a perfect novel, but not one I would pass up either. I think my biggest problem lies in both extremities: the beginning and ending, which is where I often find is the most important to compel the reader. However, the originality of it alone is well worth it.

25 Responses to “Review: The Shadow Society by Marie Rutkoski”