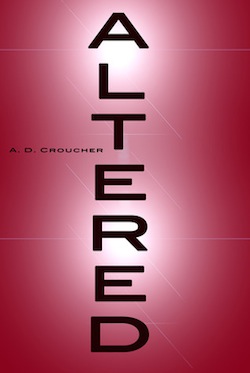 Reese has a plan: keep his grades up, work hard on the basketball court, apply to his favorite Ivy League college, and don’t get arrested.

Reese knows things no one should know. He always thought he just had good instincts, but he’s noticed that it’s been getting worse. Lately it seems like something else.

Something more than instinct.

And he’s not the only one that has noticed.

With his life in danger, Reese needs a new plan: escape.

*A copy was provided by A.D. Croucher for review purposes*

Not to mistake this book with the upcoming Jennifer Rush novel by the same name, Altered by AD Croucher is also a sci-fi and it deals with genetics, wild experiments, and my personal favorite: altered humans with superhuman abilities. No matter my small quirks with it that ultimately decided its 3 star fate instead of the 4 I immediately wanted to give, it’s a genuinely good book. It’s entertaining, it offers a riveting plot that never ceases, and it has just the right combination of science fiction and action.

Having been tuned into the trend of science fiction novels lately, I was quick to get sucked into this novel when it spoke of mind reading and mysterious medical experiments. I found it wildly interesting, especially considering how it doesn’t leap too out of range of plausibility; oftentimes, science is as scary as it is fascinating! If you’re the type of reader who enjoys books with super powers, our protagonist here can read minds, we’ve also got super strength along with some more… bizarre experiment consequences in the mix. Not only are these kept a mystery, we’re treated to plot twists that will completely change what you foresee from this whole series.

The mystery is one, albeit small, reason I did not end up completely in love with this novel. Of course I understand the need for secrets when it comes to any type of new medical undertaking, but between the doctors and Reese, I found the reasons for the secrecy a little weak. In his position, if I was explained from when I was old enough to understand, I would have been quite willing to work with them to potentially help their research–what has been done has already been done. He would have died if not for them, and it could help others. Why keep it hidden? Why take him against his will, do loads of tests on the kid, lock him in rooms, and basically wait until he tries to escape repeatedly before telling him what he’s there for? Their explanation isn’t even so scary–even though the truth may be a little altered. Instead of being anxious, I was wondering why there was all this drama. Perhaps we’re expected to assume the worst. Perhaps I have just read so much horror that I’ve been conditioned (which scares me!).

Some dystopians are great because of world building, some propel you into your protagonist’s fears and sufferings, others are simply fantastic because of their plot. The latter can work very well in some cases, but in others, it leaves you wanting more from your characters, which is the case in Altered. We meet some truly good characters–the protagonist being male was a plus for me as well,–but where it falters is in his development and, later on, in his romantic wandering. Although I did like his characters, and he has an easy voice to follow through this story, I can’t say I know who he truly is more than a character in a book. He didn’t particularly grab me. As for the romance in the novel, I think it to be its weakest point. There is a vague and brief love triangle with two girls–a nice step from the norm–and I did not feel anything between any of the characters in this novel, nor did I understand why he was so infatuated with one to the point of risking everything. Even the dramatic relationship between a girl and her mother (the villain) felt overly acted.

Yes this book brings it in the entertainment value–absolutely. It’s when you consider the novel as a whole that it falters a little. As it’s so short with only a little over 200 pages, you at least have no time to reflect on this lack of character development while you’re being propelled into an adrenaline filled joyride. It’s one made for, and undoubtedly enjoyed by, fans of action movies!