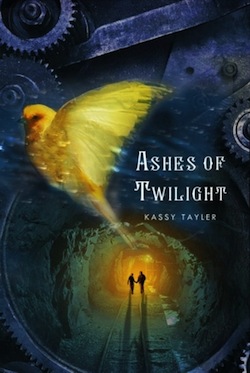 Wren MacAvoy works as a coal miner for a domed city that was constructed in the mid-nineteenth century to protect the royal blood line of England when astronomers spotted a comet on a collision course with Earth. Humanity would be saved by the most groundbreaking technology of the time. But after nearly 200 years of life beneath the dome, society has become complacent and the coal is running out.  Plus there are those who wonder, is there life outside the dome or is the world still consumed by fire? When one of Wren’s friends escapes the confines of the dome, he is burned alive and put on display as a warning to those seeking to disrupt the dome’s way of life. But Alex’s final words are haunting. “The sky is blue.”  What happens next is a whirlwind of adventure, romance, conspiracy and the struggle to stay alive in a world where nothing is as it seems. Wren unwittingly becomes a catalyst for a revolution that destroys the dome and the only way to survive might be to embrace what the entire society has feared their entire existence.

Ashes of Twilight starts off very strong and quite intriguing when we’re taken into this desolate world inside a claustrophobic dome. After the planet was destroyed, humans were forced to take shelter inside a dome where the royals rule, leaving everyone else as mere slaves to insure it all runs properly.

It’s your typical dystopian with minor steampunk elements. The blurb as well as the cover clearly makes it sound much more exciting than it is, however. So, when I’m reading this and I pass the half way point with still nothing very monumental happening other than a lot of talk about wanting to leave, I began to rethink what I had gotten myself into. This wasn’t an exciting novel, nor was it intense or really that much entertaining. If you think this novel is about leaving this dome and finally finding out what’s on the outside, having to survive, learning dark secrets about their world… think again. The whole novel takes place inside the dome, while Wren questions everything she has ever been taught. She questions if the outside is really only flames and nothingness. She questions their way of life. She questions… and questions… and never actually does anything about it. Sure this world is very dark and sinister, people get burned alive, people suffer and the way they live is unimaginable. Nonetheless, there is no “pulse pounding action” here. There is nothing that even compelled me to turn the page other than wanting to be done with it. I mostly found myself bored with the stagnancy. The part of the blurb that states “Wren unwittingly becomes a catalyst for a revolution that destroys the dome and the only way to survive might be to embrace what the entire society has feared their entire existence” only happens during the last 2 chapters…

Furthermore, I’m not the kind of reader who will always notice or pick at particular annoyances with the writing in a book. I did, however, get irritated by the constant repetitiveness in this one. Aside from the persistent questions asked by our protagonist Every. Two. Pages, the most prominent annoyance is the constant appearance of “yet”. It seemed like every third sentence was formed using that same conjunction and it literally became distracting. Instead of reading I was hunting for the next “yet”. And there it was, again and again. Yes it’s small, and might go unnoticed for some, yet… it stood out for me like a sore thumb that kept poking my eyeball.

Even though I haven’t mentioned anything positive up to this point, the book wasn’t terrible. I did like the dark, dreary world. I liked the mystery of the unknown outside world. It did have extreme potential if only it had a faster pace; more meat to its frivolous bones. The characters that failed to both charm and compel me were no help, either. Every one of them were cut from the same cloth.

When I go into a dystopian I’m looking for an exciting ride: A pulse pounding story that makes you fear for the characters and cringe at the way they have to live. Although Ashes of Twilight is definitely cringe worthy at times, it simply lacked suspense, narrative drive, and clearly fell short of my expectations.

22 Responses to “Review: Ashes of Twilight by Kassy Tayler”