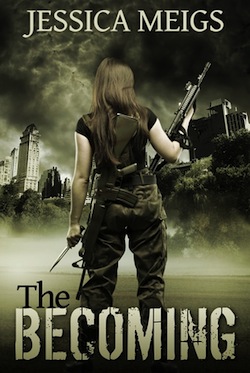 The Michaluk Virus is loose.

In the heart of Atlanta, Georgia, the Michaluk Virus has escaped the CDC, and its effects are widespread and devastating. Most of the population of the southeastern United States have become homicidal cannibals. As society rapidly crumbles under the hordes of infected, three people—Ethan Bennett, a Memphis police officer; Cade Alton, his best friend and former IDF sharpshooter; and Brandt Evans, a lieutenant in the US Marines—band together against the oncoming crush of death and terror sweeping across the world.

As Cade, Brandt, and Ethan hole up in a safe house in Tupelo, others begin to join them in their bid for survival. When the infected attack and they’re forced to flee, one departs to Memphis in search of answers while the others escape south to Biloxi, where they encounter more danger than they bargained for. And in Memphis, the answers that one man finds are the last answers he wanted, answers that herald a horrific possibility that there may be more to this virus than first suspected.

*A copy was provided by Jessica Meigs for review purposes*

Starting a new zombie series is always bittersweet. Because a good zombie story is not about the zombies, it’s about the characters. Characters that you will shortly begin to know and love, characters that you truly care about, but… you know death will eventually come knocking to at least one of their doors. However, this is exactly why I love zombie books. It’s not for the gore, and I’m not very impressed by those who try to romanticize them nowadays; zombie books are about surviving! They take you into the lives of families and friends after the world has gone to hell, and you get to root for them, and hope against all odds that they will survive, because thinking of losing even one is torturous. If done right.

Jessica does! She brings to life many characters that become the heart of this story. We visit them pre-zombocalypse. We see them live very happy, normal lives before the end of the world is upon them. Then we see them grow into fierce survivalists that they have to be, or become, making you question how you would fare in their situation. Would you collapse over the loss of a loved one and get yourself killed in the process? Or would you accept that they would want you to fight to survive–literally to the death? I loved how we saw different ways people deal with grief, especially in such high stake situations. We visit all the emotional effects such a disaster can bring; anger, loneliness, paranoia. We also see loyalty, relationships grow, a hint of some brewing romance, as well as a whole heck of a lot of adrenaline pumping moments.

Told from several perspectives, we first get to travel with the characters as a group and see how each one is coping, but eventually, we also see what happens to each perspective after some of them separate. This creates even more suspense as you’re constantly worried about what’s happening to the others, while you’re never wanting to leave your current characters. Each journey is filled with action and terrifying situations that I love to see in my zombie books. We also meet new people along the way that join the already fantastic cast of original characters.

As in any such apocalyptic situations, the characters don’t always know exactly what has happened: what caused this virus and how it works. In this case we do get some initial hints on how it all started, and while some of these speculations are basically just that: speculations, It’s fascinating, I love speculating about crazy happenings that could very well be occurring in those secret hidden CDC labs under China right now! (this review is now flagged). We also learn some very interesting facts about these zombies that make them a little more unique than your traditional mindless undead flesh eaters–which are impossibly scary in of themselves if only for the fact that they never EVER stop, and numbers are clearly on their side. Jessica’s zombies however… these will chill your bones. I predict a very epic showdown in the end of the series that could possibly be ridiculously awesome!

For the likeminded zombie fans, this is one series that I would not hesitate to recommend. It has the perfect mix of zombie action, character building, and suspense, all wrapped in a completely badass cover!

19 Responses to “Review: The Becoming by Jessica Meigs”