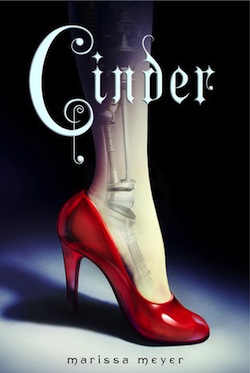 When I see retellings of childhood classics I’m automatically a little wary. Can they really live up to a classic? Can they really bring something to the table that hasn’t been tried by dozens before? Somehow, someway, Marissa Meyer thought up of a genuinely creative re-imagining of one of the most popular classics–Cinderella. Set in the future, Cinder is now a cyborg–how’s that for unique? She’s made up of wires and metal–a common way to “fix” humans in this engaging future world. Although she has been bought and is basically no better than a slave to a nasty woman, Cinder is brilliant at what she does. She’s smart and resourceful; a true modern day Cinderella cyborg!

Rather than a glass slipper, we have a poorly fitted foot–an android foot. In this very distant future, androids and humans roam the earth where the plague is a thing to fear in every day life. The world building in this book is fantastic. It’s unimaginably creative with a way of telling that completely grips you and never lets go. The Lunars and the abilities they possess, along with the fear of death at every corner, is perfectly mixed in with classic elements of Cinderella. It’s ingenious. I have never been as satisfied with a fairy tale retelling as I am with Cinder. The characters are witty and fresh, with a love story that has it all: a swoon-worthy prince, a charming personality, great chemistry–a true fairy tale romance.

Even though it’s essentially a retelling, the originality in this novel is outstanding. From the futuristic concepts to the interesting turns to the plot, we have a whole new enchanting world to get introduced to. While there are new spins added to the story, these are not especially unpredictable. From the very start it’s obvious what the big twist is going to be. However, it’s obvious in a way that makes me think this was the author’s intention. As if she wants the reader to know what Cinder does not, making us feel wistful; if only everyone knew, things would be so different for her.

This review feels short, but honestly I don’t feel there is more to say. The book is a very quick read with already so many reviews out there that I’m not bringing anything new to the table. Clearly, I’m late in this game, but I’m glad I finally bit the bullet and read this delightful novel as it is just that: delightful!