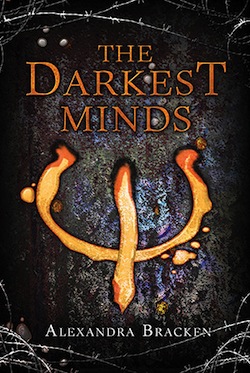 When Ruby wakes up on her tenth birthday, something about her has changed. Something alarming enough to make her parents lock her in the garage and call the police. Something that gets her sent to Thurmond, a brutal government “rehabilitation camp.” She might have survived the mysterious disease that’s killed most of America’s children, but she and the others have emerged with something far worse: frightening abilities they cannot control.

Now sixteen, Ruby is one of the dangerous ones.

When the truth comes out, Ruby barely escapes Thurmond with her life. Now she’s on the run, desperate to find the one safe haven left for kids like her–East River. She joins a group of kids who escaped their own camp. Liam, their brave leader, is falling hard for Ruby. But no matter how much she aches for him, Ruby can’t risk getting close. Not after what happened to her parents.

When they arrive at East River, nothing is as it seems, least of all its mysterious leader. But there are other forces at work, people who will stop at nothing to use Ruby in their fight against the government. Ruby will be faced with a terrible choice, one that may mean giving up her only chance at a life worth living.

*A copy was provided by Disney Hyperion for review purposes*
Going into the Darkest Minds, I didn’t really know what to expect. With so many dystopians out there there are quite a few that simply don’t live up to the genre. However, Alexandra brings in a new and exciting dystopian novel with mysterious diseases, abilities, merciless camps; basically the apocalypse with a Heroes-like flare that becomes quite exhilarating.

Mind reading, mind control, memory manipulation, telekinesis; these are the powers that teenagers are suddenly capable of in this world, that is, if they don’t die suddenly in their tween years. We go into this story completely blind. Alexandra has a very show rather than tell writing style and while it can be a little confusing at first, I really enjoyed the slow and steady way we’re dipped into her world. I also appreciate an author that assumes her readers are intelligent enough to discern what she’s showing us. Too often have I despised books due to repetitive observations and frequent recapitulations to make sure we are getting it. It goes without saying, you have to pay attention during this world building. It’s not spelled out for us, and it’s amazing the way we’re left to build it up in our minds, piece by piece.

The same goes for Ruby: While the story is told through her point-of-view, we don’t know who she is or what has happened to her prior to the first page of this novel. We have to be patient to get her story, which I promise is both heartbreaking and hopeful. While I wouldn’t call her particularly likeable, she doesn’t fail to engage at every page as her voice is very easy to identify with, and being in her head is at one baffling and fascinating. She is often as much of a mystery to herself as she is to us. The ones walking by her side also fills us with intrigue as we’re compelled to uncover their unique abilities and the insecurities that come along with. These people all have their very own piece in this story with pasts and ideals for some kind of future in this cruel world.

The future doesn’t look too bright, however, as the whole book is spent learning how horrible the adults have been dealing with these new sudden abilities. This is soon followed by a long lasting chase which leads to more questions, lots of uncertainties, and definite skepticism. Despite being a very active plot that keeps up quite a bit of suspense combined with a constant feeling of uneasiness, the pacing is kept natural. This not only allows us time to decipher our characters, but also gives us the opportunity to truly understand the gravity of the world they now have to suffer.

The romance is not the book’s strongest point. For the most part, it’s non existent–I, for one, more than welcome a plot motivated on something other than romance. But all of a sudden, it’s there, all around. The romance itself is not bad, it’s not even unexpected, just its sudden importance in the plot can be disorienting.

This is not a fluffy novel, Alexandra depicts a world that is dark and violent. It’s a slow unveiling of a world you would never want to experience. For fans of dystopians described such as this, there is plenty to fear in The Darkest Minds!

36 Responses to “Review: The Darkest Minds”