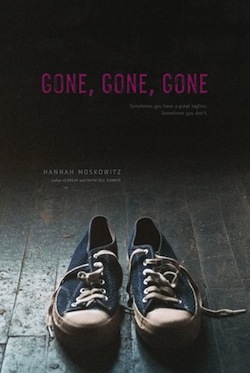 Craig’s crushing on quiet, distant Lio, and preoccupied with what it meant when Lio kissed him…and if he’ll do it again…and if kissing Lio will help him finally get over his ex-boyfriend, Cody.

Lio feels most alive when he’s with Craig. He forgets about his broken family, his dead brother, and the messed up world. But being with Craig means being vulnerable…and Lio will have to decide whether love is worth the risk.

*A copy was provided by Simon & Schuster for review purposes*
A touching love story between two peculiar teenage boys, Gone Gone Gone introduces us to Craig and Lio who are living in the aftermath of 9/11, each dealing with unique repercussions along with social ineptitudes that ultimately bring them together.

Craig and Lio both share a perspective in this novel, and each of their voices are incredibly sympathetic, moving you to the point of physically feeling their hardship and anxieties. I can’t even say I liked one perspective over the other, they compliment each other perfectly so what you get is a great example of how well a dual POV can be applied, especially in a story with so much emotional turmoil. Furthermore, these characters quickly develop into something much more, they have heart and personality, facing stresses and emotional challenges that become palpable. The writing makes them so amazingly realistic. The flaws in their way of thinking; the sometimes excitable, sometimes jumbled, and often awkwardly structured thoughts make them one hundred percent real. The dry, sarcastic humor–especially from Lio–offers a nice balance against the otherwise intense tone of the book as well.

While this is, above all, a love story, it occurs the year after 9/11 during the Beltway Sniper Attacks. Having not been familiar with these shootings, a quick Google search is all it takes to see what a tragedy it was, and how completely it terrorized a suburban DC area. No matter how much you know of this ordeal, Hannah has a way with words that will not only show you, but make you feel the threat and terror living through such an event causes.

Intense in tone and in emotion, I was surprised by how much this book is not an issue book. Clearly they have issues; both of them are very bizarre with quirks and social awkwardness. But this is not about that. It’s about finding oneself, finding someone you can connect and feel alive with, which is how you get to move on from a terrible event. It’s not about being gay, or black, or weird. BUT, and this is a very small quirk that was not detrimental to my enjoyment of the book at all, though still something I took note of, I found Hannah’s way of pushing the issues aside a little more illusional than it is realistic. Except for a few stowaway sentences, I wouldn’t have known Craig was black. As hard as it is to be a gay teen, being a black gay teen makes him part of two prejudiced minorities. Yet, being black never comes up as a point of individualism in this novel. Any black teen I have ever encountered, especially in largely white communities, considers their race a rather big part of their identity. As for his sexuality, I found Craig maybe a little too confident and comfortable with it–to the point of kissing his boyfriend in front of his mom. Perhaps Hannah is going for the more modern “race and sexuality are not an issue” perspective, turning them into a matter-of-fact instead, however I can’t help but find this is more fantasy than real life. No matter the level of support in a community regarding sexuality, coming out as a teen is a struggle filled with emotional anxieties. I would think any gay kid would have a lot of self doubt and not be this nonchalant about it.

Although deeply affecting, some parts of this plot are not as fleshed out as I would have liked. There is a pile up of character dysfunctions introduced, and some aren’t further examined. For example, for being such an important part of the story, we’re presented with a pretty vague and blurry idea of what exactly happened between Cory and Craig. I also wanted to have a further understanding of the families and their dynamics–Lio’s in particular. Again, this qualm is very minor, barely having any effect in my reading experience, but it still needed mention.

This is the perfect read for any and all contemporary fans. We have a story that is entirely gritty and utterly raw. Its beauty and heart radiates inside a tale that has such pain and hardship. I became truly mesmerized by Hannah’s writing style, and if she is not yet, this is an author to have on your automatic buy list!