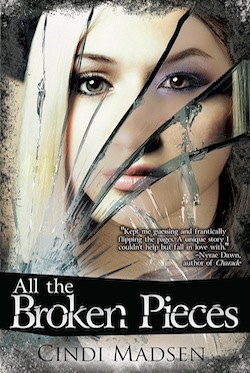 What if your life wasn’t your own?

Liv comes out of a coma with no memory of her past and two distinct, warring voices inside her head. Nothing, not even her reflection, seems familiar. As she stumbles through her junior year, the voices get louder, insisting she please the popular group while simultaneously despising them. But when Liv starts hanging around with Spencer, whose own mysterious past also has him on the fringe, life feels complete for the first time in, well, as long as she can remember.

Liv knows the details of the car accident that put her in the coma, but as the voices invade her dreams, and her dreams start feeling like memories, she and Spencer seek out answers. Yet the deeper they dig, the less things make sense. Can Liv rebuild the pieces of her broken past, when it means questioning not just who she is, but what she is?

*A copy was provided by Entangled Publishing for review purposes*
All the Broken Pieces reminded me a little of Slated which I had just read recently, though this one is a more contemporary, and we get answers! Reading two similar books so close together is bound to provoke comparisons, and I think because I was craving for answers that we never got in Slated, I enjoyed this stand-alone a lot more than I might have otherwise. This is not to say that the book is bad–on the contrary, its mind boggling nature sucked me in until the very end, but the ending itself, as well as some plausibility issues I had with the whole story, does make it a lower end 4 stars.

We have a girl who wakes up in a hospital with zero memories of her life, as soon as she’s awake her parents pack up and leave to start over in a new town. All the while, Liv is trying to find out who she is, and in not long, what her parents are hiding from her. The mystery of it all is what keeps this book alive, no question. We get just enough bizarre visions and sporadic memories to leave us completely baffled. I would try to piece it all together, when another brick would be thrown out of nowhere to halt any and all theories I might have had. I was thrilled by this alone as I flew through this novel at wicked speeds. This leads us to the ending; every mystery will either break or make its readership during the final verdict. What we find out at the conclusion is unquestionably fascinating and unpredictable, yet I can’t help but wonder at the believability of not only the final explanation, but everything leading up to it. We do live in a world where information is openly available even in the smallest of towns, after all. This is as far as I can go without spoilers. All in all, the ending is satisfactory, though not especially memorable.

Charming when he wants to be, Spencer also comes with his own secrets and mysteries to add onto the already large pile. I enjoyed how it played into the romance, making him at once someone you want to trust, and someone you feel you can’t. While the romance is not necessarily original in its foreseeable nature, I found Spencer incredibly sweet and their relationship is one of the most realistic aspects of this novel.

Since the main focus of this book is the mystery, reviewing it in greater detail becomes impossible without giving away answers–which I refuse to do. As previously mentioned, if you’re a fan of Slated by Teri Terry, or books that love to play with your mind, I’m just about certain you will devour this one just as eagerly!

24 Responses to “Review: All the Broken Pieces by Cindi Madsen”