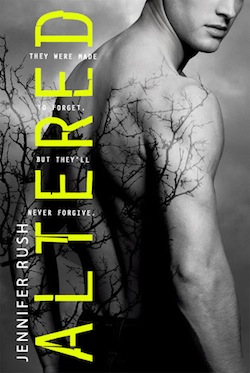 When you can’t trust yourself, who can you believe?

Everything about Anna’s life is a secret. Her father works for the Branch at the helm of its latest project: monitoring and administering treatments to the four genetically altered boys in the lab below their farmhouse. There’s Nick, Cas, Trev . . . and Sam, who’s stolen Anna’s heart. When the Branch decides it’s time to take the boys, Sam stages an escape, killing the agents sent to retrieve them.

Anna is torn between following Sam or staying behind in the safety of her everyday life. But her father pushes her to flee, making Sam promise to keep her away from the Branch, at all costs. There’s just one problem. Sam and the boys don’t remember anything before living in the lab—not even their true identities.

Now on the run, Anna soon discovers that she and Sam are connected in more ways than either of them expected. And if they’re both going to survive, they must piece together the clues of their past before the Branch catches up to them and steals it all away.

Altered is one of those books that are highly addicting, with action that engrosses you until you become quite satisfied with the read. But, there are particulars that nagged at me which, individually, are irrelevant, but together, they become a little too bothersome to simply forgive and forget.

The whole story in Altered consists of a chase. These modified humans have escaped their prison, and, bringing Anna with them, are on the run from her father’s employers. Throughout this run we get clues that were planted to help them find something that is apparently very important. Deciphering these clues were, for the most part, pretty interesting, even clever at times. However, when they stumble upon a “code” that is simply a mix of X V I letters… and they don’t get what it means… I had to stop reading to take a breath and roll my eyes a little. Even though Anna is home schooled and lacking a life outside the lab, numeral numbers are hardly mystifying. Especially when she “gets it” after seeing a grandfather clock. This is definitely a very small matter, nonetheless, it got under my skin and made me see the protagonist as a little brainless.

That was the first annoyance I stumbled upon. The second came by when they idiotically decide to walk into the enemy headquarters. Why? I have no clue. It made no sense for them to do so other than to create more plot excitement. Obviously, it went about as well as you can imagine. Seeing as they had no reasoning behind this decision, I got irritated by the stupid factor of it and hoped they got what they deserved.

These issues aside, I did quite enjoy the book, especially the scientific notions involved. I love the idea of genetic modifications, humans with abilities or powers, and Altered is fascinating on that front. I wanted to know more, though. Why it all started; the point behind everything. I’ll assume those details are forthcoming. In this first installment, we’re focusing on the boys and learning the ropes along with them. The characters are a fun bunch of charismatic guys. Some charming, some… not. I enjoyed the diversity in their personalities, which made for a great group dynamic. They’re all as close as brothers; they’re all they’ve ever known, after all. There is also romance involved, which becomes the source of some controversy between the boys. I thought Rush blended this aspect well with the overall pacing of the book; it will satisfy those who need romance in their books, but it doesn’t distract from the intensity of the plot. Personally, I never felt a true connection between Anna and Sam, though. It was missing that spark. This could be due to characterization issues: With so much happening, being on the run for most of the book, character building is not the book’s first priority. This is fine for the type of story it’s trying to be, but the authenticity is lacking in the romantic element.

Altered is not without its flaws, still, the story is engaging with enough excitement to make these flaws a little less consequential. Having seen this novel being tagged as dystopian/post apocalyptic, I must warn you that I never got a dystopian feel from this whatsoever. It’s an action novel dealing with genetics, abilities, and a messed up government behind it all. Read it when you’re in the mood for a fast paced sci-fi thriller, not a science-y dystopian–in which case I’d recommend Partials.