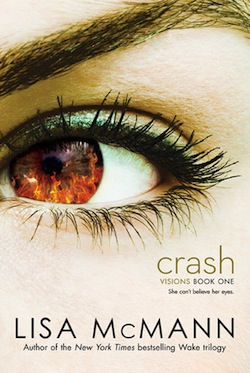 Jules lives with her family above their restaurant, which means she smells like pizza most of the time and drives their double-meatball-shaped food truck to school. It’s not a recipe for popularity, but she can handle that.

What she can’t handle is the recurring vision that haunts her. Over and over, Jules sees a careening truck hit a building and explode…and nine body bags in the snow.

The vision is everywhere—on billboards, television screens, windows—and she’s the only one who sees it. And the more she sees it, the more she sees. The vision is giving her clues, and soon Jules knows what she has to do. Because now she can see the face in one of the body bags, and it’s someone she knows. Someone she has been in love with for as long as she can remember.

*A copy was provided by Simon & Schuster Canada for review purposes*
I’m weary of books sometimes, but more often than not I surprise myself by loving them. So this is why I still gave Crash a try knowing it’s written by the same author who wrote one of my least favorite books of all time. It’s unfortunate, but this is a sign that me and Ms McMann simply aren’t meant to be. I have to learn to move on, regardless of the temptations that may come about.

Jules Jules Jules, you had such potential! You see visions! And there are body bags in your visions! I wanted to like this plot, and Jules, so much, but I just couldn’t. The way she speaks, the obsession towards pizza boy, her superficial personality and lack of development, it all adds up quickly and unforgivably. Let’s get a quick example shall we?

“I mean, I watch him, though. Like, all the time, but I’m not a creep or anything. And I eavesdrop.”
-Quoted from the uncorrected proof

Yes, Jules, those are, in fact, signs of a creep. Like, don’t kid yourself! This quote that we come upon early in the game was a very good sign that Jules and I wouldn’t get along. Throughout most of the book, she’s either dwelling on this old family grudge that keeps her and Sawyer apart *le sigh*, or she’s complaining about her visions, on which she eventually acts for no other reason than her own selfishness. This leads to even more stalkerish behavior; for instance, hiding out in his parking lot and frantically running home when his mother sees her.

After all this creepy, you would think–or hope–that Sawyer would run screaming… *shakes head disappointedly*! Is Sawyer any more likeable than Jules? Maybe if he had enough personality to even be liked or disliked. He’s the lesser of two evils, sure, but nothing more than a name on a page. As you can guess, this leads to a romance that is, at once, extremely predictable and plain. I couldn’t have cared less if the vision came true. It would certainly have made it more exciting.

The only thing I liked in this novel was the family aspect. This is a family who lives, works, and breathes together. They’re around each other every minute of every day, turning siblings into the best of friends. Again, we would have needed more character development for me to truly care about these people. In the end, they were more or less there for filler and plot conveniences.

Characters were clearly the fall of this book. This plot could have been extremely engaging if it had something to give it life. Instead, in addition to its predictability, it quickly became tiresome–the same vision over and over with no progression, suspense, or hint of tension. I did garner a trace of curiosity on how it would play out when she tells someone about them. Though this may be because I was hoping they would lock her in a cage and I could be done with this book.

Alas, this is where my disastrous relationship with McMann comes to an end. It was short lived with very little chemistry, but you know what they say: One woman’s trash is another woman’s treasure. Or something.