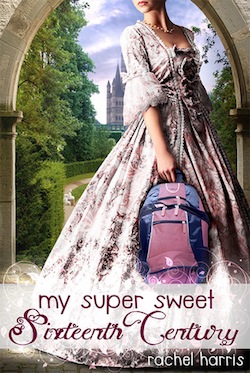 On the precipice of her sixteenth birthday, the last thing lone wolf Cat Crawford wants is an extravagant gala thrown by her bubbly stepmother-to-be and well-meaning father. So even though Cat knows the family’s trip to Florence, Italy, is a peace offering, she embraces the magical city and all it offers. But when her curiosity leads her to an unusual gypsy tent, she exits . . . right into Renaissance Firenze.

Thrust into the sixteenth century armed with only a backpack full of contraband future items, Cat joins up with her ancestors, the sweet Alessandra and protective Cipriano, and soon falls for the gorgeous aspiring artist Lorenzo. But when the much-older Niccolo starts sniffing around, Cat realizes that an unwanted birthday party is nothing compared to an unwanted suitor full of creeptastic amore.

Can she find her way back to modern times before her Italian adventure turns into an Italian forever?

After a killer ending that produces vast amounts of anticipation for the sequel, I have decided I did not, in fact, hate this book for being over, and finally admitted to myself that I actually secretly love cliffhangers that succeed in making me wildly excited for the sequel. Because boy will it be an entertaining one I am sure! I definitely closed this with much more than I was hoping to get from it. Not being a history buff whatsoever–I shy away from anything historical and so I was on the fence about this one. Then I began to see an influx of positive review after positive review, and, well, you know about “curiosity kills the cat”? I am that cat! And if I do die, at least it won’t be from terrible-ism (if I say it’s a word, it’s a word!).

The main reason that I highly enjoyed this regardless of its historical setting is because of the main character’s modernistic charm; moreover, Cat is not from that era! She is from our day, with our iPods and iPhones. You can only imagine the lifestyle change she has to go through when she is suddenly thrown into the 16th century! When I wasn’t chuckling at her faux-pas, I was swooning over the wonderful romance that I’ve come to expect–and relish–from Entangled titles. So if, like me, you’re crippled by the idea of reading a historical, this one deserves an exception! And for the history buff, don’t be disappointed either, as there are culture and art references to placate you. With that said, it’s a perfectly well balanced novel that brings the charm and heart of the 16th century, while keeping a modern style writing and witty, contemporary characters.

So unlike our 21st century for obvious reasons–some more than others–the 16th century is quite intriguing. The lack of technology and wardrobe differences aside, guys were a lot more chivalrous in those days. My Super Sweet Sixteenth Century brings us a romance that is magnificently sweet, endlessly romantic, and your heart will break from the start knowing it can’t last forever. He is, literally, centuries older than her after all. However, it doesn’t stop this from being a maddening, chemistry filled love story.

With even more odds stacked against my personal taste, this novel, aside from a historical-ish, brings time travel into play. As a reader who is hard to please with plots of time travel, I felt this one was handled in a more fantastical, aloof way which may not work very often, but it does in this case. You aren’t meant to think of the complexities behind it; this is a magical adventure, and you roll with it. On a related side note, the explanation we get from the gypsy regarding her motivation is a little weak, I think I would have preferred if it was simple coincidence, but maybe there is more to it that we have yet to discover.

From romance to humor, My Super Sweet Sixteenth Century combines the 21st and 16th century into an exotic read that will not only please fans of historicals, but also those who have an unnatural urge to stab them. However, fair warning that the ending will show you just how funny Rachel thinks she is!! *glares at the fact that there are no more pages*