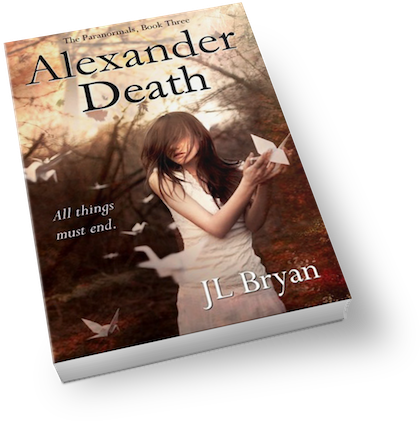 While Seth searches for Jenny, Dr. Heather Reynard of the CDC unravels Seth and Jenny’s secrets.

Alexander opens Jenny’s mind to her deep past, and to the full horrific extent of her powers.

Torn between her feelings for Alexander and Seth, and between her past lives and her present, Jenny must prepare to face her enemies, as well as the darkness within her…

*A copy was provided by J.L. Bryan for review purposes*

*Spoiler free for the series!*

This series started so innocently didn’t it? I mean, we have Jenny who’s a timid, broken girl with the touch of death–or disease, who keeps to herself (for good reason) being all innocent and sweet. Ha! Good one! Sweet little Jenny is no more. Her character changes tremendously between the first and third book of this series, both emotionally and mentally. Such a plot would not have thrived otherwise, It was a need, and it was done with perfection. Her growth mirrored the plot exactly, going from the Jenny she thought she was, to the Jenny she didn’t know she had to be.

Like its protagonist, this series has evolved from a cryptic horror into a complex, even scandalous plot. Again, and I keep mentioning it because it seems to be an ongoing misconception on these books, this is not intended for young readers! Yes it may have teenage characters, but it’s a fully adult read that comprises of horror, sex, and drugs, followed by more horror, stronger drugs, and fully described sexual acts! Capish? *shoves book in your face because it’s awesome*

Isn’t it the worst to review sequels and up? I feel like I’ve said it all in the previous reviews, and since I refuse to use spoilers, I’m pretty much at a loss. Don’t take this the wrong way, it’s a great installment that fully lived up to my expectations–although the first remains my favorite. I’m really enjoying how deep we’re getting into this epically unique plot. The ending of Jenny Pox blew my socks off, which was the first leaf that turned this series into something completely unexpected. In this third book, and as the title portrays, we get to learn more about this Alexander fellow who started to appear mysteriously in the sequel. I thought his character was very unnerving. I knew I shouldn’t trust him or his intentions, still, I found him indefinitely alluring. He has this charm that makes it easy to put our concerns on the back-burner. Besides Alexander, we also get glimpses into the perspective of the other characters, who are all on the hunt for Jenny; some to save her, others to kill her. It’s an exciting and drama filled novel, like its predecessors.

More characters means more story, which means more secrets revealed. We learn a great deal more about Jenny and the history surrounding her. I thought the various twists were woven in greatly and, while they’re not made to shock necessarily, I appreciated how unexpected some were. And as I’ve mentioned previously, I do enjoy how JL considers the consequences such a plot would have on the real world, like the CIA and CDC’s involvement. Not everyone can be oblivious to a bizarre disease that is sporadically and freakishly killing people, seemingly at random, and always with a particular girl present. I was satisfied with the way things ended in this novel. The series is filled with details ranging from their abilities to their complicated relationships, and I was weary of how things would all tie up at the end. BUT, a little bird told me that there was now (or will soon be) a fourth book *gasp*, so we will see how that ending compares. I will either be impressed at the ability of a planned trilogy to continue without feeling like we’re beating a dead horse, or I will curse JL for life. Hey, it’s totally his call!

If you’re a horror fan–think Carrie–then I’m sure you have read this series already so I have nothing else to say. Right? *glares*