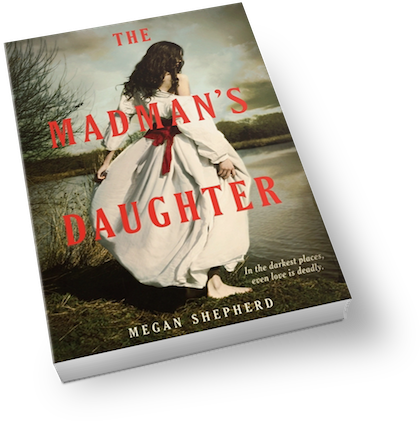 In the darkest places, even love is deadly.

Sixteen-year-old Juliet Moreau has built a life for herself in London—working as a maid, attending church on Sundays, and trying not to think about the scandal that ruined her life. After all, no one ever proved the rumors about her father’s gruesome experiments. But when she learns he is alive and continuing his work on a remote tropical island, she is determined to find out if the accusations are true.

Accompanied by her father’s handsome young assistant, Montgomery, and an enigmatic castaway, Edward—both of whom she is deeply drawn to—Juliet travels to the island, only to discover the depths of her father’s madness: He has experimented on animals so that they resemble, speak, and behave as humans. And worse, one of the creatures has turned violent and is killing the island’s inhabitants. Torn between horror and scientific curiosity, Juliet knows she must end her father’s dangerous experiments and escape her jungle prison before it’s too late. Yet as the island falls into chaos, she discovers the extent of her father’s genius—and madness—in her own blood.

*A copy was provided by Harper Collins for review purposes*
Well… The Madman’s Daughter is clearly its own kind of disturbing! It’s cruel and grisly–I kind of loved it! If you enjoy bizarre “mad doctor” stories, if you enjoy Gothic novels in general, then this book is for you!

As a big fan of Gothic novels, I can tell you that they are much more than just a book. They stand out. Being able to write a good Gothic novel is an art in of itself. The biggest part of what makes them great is the rich atmosphere that they exude. If an author is able to create a story that sends shivers down your spine, thrusting you into every sinister nook and cranny of its setting, then that author will have my heart, and Megan did just that! It’s the first thing I noticed when I started The Madman’s Daughter, and it’s what I loved the most about it. I could vividly picture this dark, eerie world filled with secrets that you just know are bound to both disturb and astound you. A mad scientist with crazy ideas and a whole island isolated from the rest of the world to create experiments… It’s a good sign that you’re going to get a lot of bat-shit craziness! You have been warned!

The dark vibe in conjunction with a driven protagonist gives us the perfect combination for such a story. It would have been very unsatisfying had she been a damsel in distress; this story needed someone just like Juliet. Someone determined and intelligent. Someone who suspects that she, also, inherited a little madness from her father. Not batting an eye when you cut off the head of a (live) rabbit is a good sign of such a fact. But when she decides to go after the truth, she shows fearlessness and tenacity. Seeing her stand up to her father is exhilarating! I adored her character. I will admit I was not a huge fan of the romance, however. We do have a love triangle which I think was not especially necessary, but did amount to something at the end, at least. Neither boys were anything special to me, they never got into my heart as far as love interests. They were great characters though and I enjoyed the part they played in the story. Likewise, every side character in the book is wonderful and… unusual. They’re either a scientific experiment or a little off in the head. Balthazar is my personal favorite. We meet him fairly early on and his disfigurement is only one part of his charm. What was the most disturbing for me, was how far my imagination would go when I started to think of these creatures. It’s all kinds of messed up. I freaked myself out time after time! Get ready to meet some strange individuals!

Going hand in hand with a great Gothic novel is the underlying mystery throughout the book. How far has the doctor gone? What is his big plan? What exactly are they so afraid of on the island? I was both amazed and terrified by this madness that surrounds not only the doctor, but the whole island and their inhabitants. I wasn’t even disappointed when I caught on to the bigger twists before I was meant to. Although one of them is the kind of obvious that makes me think we were supposed to know. Regardless, the highly secretive and cryptic atmosphere is maintained all through to the end.

With rich writing that propels you into this gloomy, unnerving island, separated from civilization without chance of escape, The Madman’s Daughter is going to be a hit amongst those who love eerie Gothic thrillers with a side of grotesque!

39 Responses to “Review: The Madman’s Daughter by Megan Shepherd”