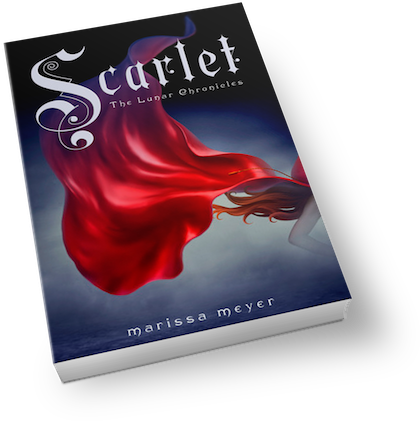 Cinder returns in the second thrilling installment of the New York Times-bestselling Lunar Chronicles. She’s trying to break out of prison—even though if she succeeds, she’ll be the Commonwealth’s most wanted fugitive.

Halfway around the world, Scarlet Benoit’s grandmother is missing. It turns out there are many things Scarlet doesn’t know about her grandmother and the grave danger she has lived in her whole life. When Scarlet encounters Wolf, a street fighter who may have information as to her grandmother’s whereabouts, she has no choice but to trust him, though he clearly has a few dark secrets of his own.

As Scarlet and Wolf work to unravel one mystery, they find another when they cross paths with Cinder. Together, they must stay one step ahead of the vicious Lunar Queen who will do anything to make Prince Kai her husband, her king, her prisoner.

*A copy was provided by Raincoast Books for review purposes*
*Spoiler free for the series!*

Not everyone can pull off retellings, or even stories inspired by classic fairy tales. They more often than not have a certain missing element that stops them for shining. Rarely do they stand out among the masses like Cinder does. Marissa Meyer is one of those authors who can take an overly used concept and turn it into something completely unique, while leaving in the charm and delight of our beloved classic. Cinderella meets Red Riding Hood in this second installment of the Lunar Chronicles. This time, Scarlet’s grandmother was taken, and there is, ladies and gentleman, a very sexy, extremely charming, wolf.

Between Cinder and Scarlet, we have plenty to keep us rolling in this fairly long novel. Told in dual POV–with the occasional 3rd–we continue where we left off in Cinder, while we simultaneously get introduced to Scarlet–an equally strong deadly and feisty heroine. They both offer a lot of charisma; they’re intelligent, determined characters, and alongside each walks supporting roles who add plenty of emotion to the book, some from humor, others from frustration. And, of course, we get our old favorites. Iko, for one, in a much larger form this time, which garners its fair share of amusement. We also meet Thorne who accounts for more than a few chuckles throughout the story due to his obliviousness or dumb remarks. As promised, we also have the big bad Wolf! A very complex character, Wolf is an excellent addition to this series. His bad-boy persona is one I could swoon over for once, not being tarnished by a controlling or creepy side that, unfortunately, often goes hand in hand with this type. He had charm, tact, and motive; his development bloomed to perfection throughout the novel, Marissa has created a positively satisfying character and love interest… however… with this said, I have to admit that I did not feel a huge connection between him and Scarlet. Yes his personality makes for a great romantic hero but I didn’t feel this was used to its full potential, or maybe there was simply too much going on in this book to concentrate on sparks. There are cute moments and definitely potential, but that’s as far as it reached for me.

Like Cinder, the plot in Scarlet is not one that is filled with shock and unpredictability. It’s easy to foresee what’s going to happen, at least to some extent. However, also like Cinder, it feels like this is intentional. As if we’re meant to know before the characters, so we can resent our helplessness to warn them of the oncoming collision. Either way, the action packed pages make up for any disappointment you may carry for its predictable outcome. Plus, the ending still induces *Le gasp!* Or, more accurately, *Le headdesk*.

Still as fresh and unique as Cinder, Scarlet combines two classic fairy tales into one brilliantly structured plot. And soon, there will be three! Rapunzel will join us in the third book, Cress, and being a huge fan of this lady of thee fabulous hair, I will not rest until it is in my greedy, greedy hands!

Enter to win a copy of Cinder, here!