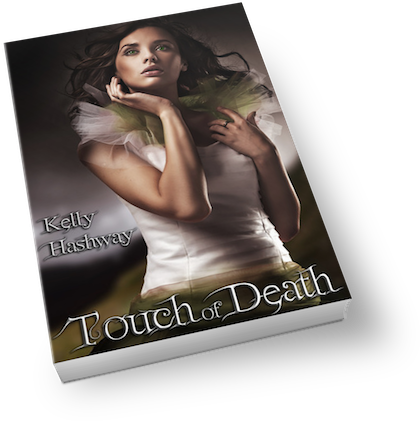 Jodi Marshall isn’t sure how she went from normal teenager to walking disaster. One minute she’s in her junior year of high school, spending time with her amazing boyfriend and her best friend. The next she’s being stalked by some guy no one seems to know.

Jodi’s deadly to the living and even more deadly to the deceased. She has to leave her old, normal life behind before she hurts the people she loves. As if that isn’t difficult enough, Jodi discovers she’s the chosen one who has to save the rest of her kind from perishing at the hands of Hades. If she can’t figure out how to control her power, history will repeat itself, and her race will become extinct.

*A copy was provided by Spencer Hill Press for review purposes*
If I had the touch of death, I’d touch this book.

Did it start off good? When people started falling to their death after coming in contact with Jodi–that’s a yes! I love the idea of this book. The inclusion of mythology and the newly discovered 13th sign in the premise are great touches. I loved how Kelly got into the lore of these necromancers and gave us a pretty complex backstory, which was both fascinating and strengthened the world building. This is the part that I liked, but unfortunately everything else about this book brought tears to my eyes; of boredom that is.

For one, if Jodi accidentally stabbed/scratched/cut/punctured herself one more time whenever she had a run-in with a person or dead animal I was going to spit on this book! I’m not a stupid reader, or rather, I am not Jodi, I don’t need to see infinite examples until the point comes across. Especially when these consisted of forced “Oops, look a that! I’m bleeding again. Shucks!” right at the opportune time a dead animal happens to be right there! Oh and did I mention she just wipes it on the poor thing? Because you know, fur = paper towel. Honestly, it felt like a parody. The ones in slow motion with an “OH NOOOO, NOT AGAIN” bubble. Yeah. And maybe–just some passing advice–it would be a great idea to stop touching people when they start, like, dying, after you do. *shrugs*

And what is it with the lack of common sense in this book? Jodi waits until just about the whole world dies before she realizes the problem is her. Then these people who are apparently the rulers of their house/race have been living with a magic-hand Medusa statue for ages and you’re going to tell me that no one has ever tried touching both of her hands at once? They were shocked that it actually did something. Yeah… duh! Even with this aside, these characters, man. O.M.G *snores*. They’re too oblivious, too bland, too stereotypical, and with a love interest that starts out as a stalker–literally–and becomes increasingly annoying as the book progresses. He, himself, induced so many sighs that could have been oxygen otherwise used by my brain, thus I blame this book for a now decreased brain cellular activity.

This font on the cover: Shoo!

The last page was good. The one where I saw it was over. I liked that part.

42 Responses to “Review: Touch of Death by Kelly Hashway”