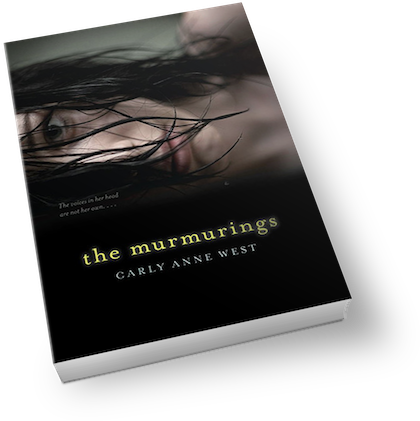 A teen girl starts hearing the same voices that drove her sister to commit suicide in this creepy, suspenseful novel.

Everyone thinks Sophie’s sister, Nell, went crazy. After all, she heard strange voices that drove her to commit suicide. But Sophie doesn’t believe that Nell would take her own life, and she’s convinced that Nell’s doctor knows more than he’s letting on.

As Sophie starts to piece together Nell’s last days, every lead ends in a web of lies. And the deeper Sophie digs, the more danger she’s in—because now she’s hearing the same haunting whispers. Sophie’s starting to think she’s going crazy too. Or worse, that maybe she’s not….

*A copy was provided by Simon & Schuster for review*
This cover…

…She is looking into my soul!! *rocks back and forth*

This cover is going to give any reader the expectation of a major creep-fest, and it does start out pretty fantastic on that front, hooking you from the first few pages. It’s bizarre and freaky, the MC seeing things from the corner of her eye and hearing unwelcome mutterings. It definitely gave me the heeby-jeebies. Along the way, however, I did feel like the book veered a little too off course for me, trapped in a web of Takers, Seers, and other explanations behind the story. There was also the lack of character development that stopped me from being one hundred percent immersed into it all. Furthermore, the romance is one I did not care for. I feel the book would have been better off without it. If I based it just on the creepy, though, it would be getting a 4!

As far as characters go, I liked Sophie well enough–although I did forget her name within minutes of finishing the book. To me she’s what I consider a surface character. She’s good for the story, she fills her role, but there isn’t much more to her. With this superficial personality I don’t feel like I really got to know her. In turn, this affected the romance in the book even further I’m quite sure, which is a part I didn’t particularly enjoy either. The way they meet and “connect”, the way they interact, even the way they kiss it all felt out of place. I’m not sure if it was my impatience towards wanting to move along and get more creepy happenings, but I don’t even understand how they got to be together. Suddenly, he was just there. Then poof, we’ve got a romantic subplot. Even though it wasn’t an insta-love in the sense that they were madly in love within days, the connection and the chemistry missed its mark for me.

Oh the murmurings! Whispers and strange mutterings, unable to understand what’s being said, feeling breath on your neck, mirrors that start to shimmer and move like liquid, seeing something from the corner of your eye; this is all pretty disturbing. I have to give props for this book’s creepy factor. While it wasn’t as constant as I was hoping due to the story kind of wandering off, this book has some great spine-chilling moments that gives its reader a bit of a rush. Those were my favorite parts hands down, and the way it’s played out in the plot is interesting enough with a unique way about it. It’s different from what I was expecting, though, it being a lore rather than unexplained phenomenon messing with your mind–which you gotta admit is much funner. Either way, a creepy book is what we have, it’s just unfortunate there isn’t much more to it than that.

For fans of thrillers, The Murmurings brings us an ominous mental institution with questionable doctors, and patients who are suffering a terrible curse. Its potential was bigger than its execution, had it had stronger characters and a tighter plot, but the book is great for an entertainingly eerie read.

22 Responses to “Review: The Murmurings by Carly Anne West”