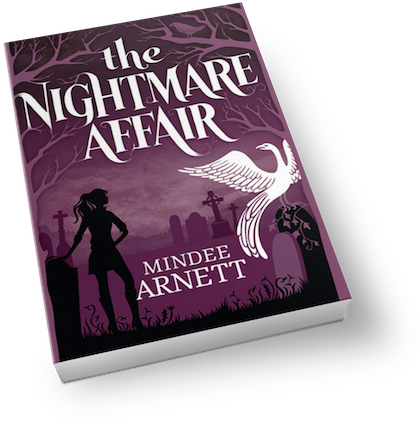 Sixteen-year-old Dusty Everhart breaks into houses late at night, but not because she’s a criminal. No, she’s a Nightmare.

Being the only Nightmare at Arkwell Academy, a boarding school for magickind, and living in the shadow of her mother’s infamy, is hard enough. But when Dusty sneaks into Eli Booker’s house, things get a whole lot more complicated. He’s hot, which means sitting on his chest and invading his dreams couldn’t get much more embarrassing. But it does. Eli is dreaming of a murder.

Now Dusty has to follow the clues—both within Eli’s dreams and out of them—to stop the killer before more people turn up dead. And before the killer learns what she’s up to and marks her as the next target.

*A copy was provided by Macmillan for review*
Nightmares! We all know what they are, we’ve all gotten them, but for Dusty, this is a little more literal than you would think. She IS a Nightmare, meaning she “feeds” by hopping into people’s dreams. However she soon learns that that’s not all there is to it–especially in her case.

For the lore and originality, this book gets all its points. I enjoyed learning about all the different paranormal beings in this book. While some are not what you would consider original–werewolves and faeries are hardly unheard of these days, Mindee brings us a slew of different beings that walk the grounds of this school and somehow, she manages to give them all a little flair of eccentricity to make them different, also menacing, while still touching base with the classics of their genres. I thought this was much more interesting than them being romanticized like we’ve become used to. As for the plot they envelop, it, too, brings out some good old classic lores involving well known paranormal beings from our childhood story books–with dark twists of course!

Sick of being forced to walk in her mother’s rebel shadow, Dusty is trying to find her own identity in this school full of magical beings. Being a half-breed, she’s been plagued with the notion that she’s a lesser being, having to deal with snide remarks and snickers since she started to attend Arkwell Academy. I liked that she’s a character who doesn’t take things too seriously or melodramatically, there is no angst with this one, she’s down to earth and puts her trust into the friends she does have, whom I have to say are quite loyal. With that said the main characters–Dusty and her immediate  surrounding–are likeable, and the romance included between some of them is kept light, but sweet. There is also a good number of adult characters included in the plot, some filling substantial roles, others nothing more than another name on a page. With this large a number of characters, though, it makes it difficult to develop a very deep connection with any of them, and for a mystery this often makes the big reveal emotionless–which was unfortunately the case for this novel.

Interesting is what I would call the end reveal. After hunting down a killer for a while, it’s always interesting to find out what exactly has been happening, why, and who is behind it. It’s difficult to point out the exact place where this one in particular lost its flair for me, but by the time we do find out all of the answers, I was indifferent about it all. This could be due to two things: I did figure out a large part of the mystery early on, some of it I personally found obvious enough to make me annoyed that the characters weren’t seeing it. Or–and I’m going to explain this the best I can without spoilers so bear with me–it could also be due to the way the twists were presented in the end: One twist is introduced, only to be turned around a minute later with another twist taking its place, annulling the first. This was done several times until finally reaching the “real” twist, which wasn’t much of a shocker for me, sadly.

Fun and refreshing with its creepy take on well known paranormal beings, The Nightmare Affair is an entertaining read that, even though it didn’t enrapture me as much as I was hoping, proved to be a fun read nonetheless.

25 Responses to “Review: The Nightmare Affair by Mindee Arnett”