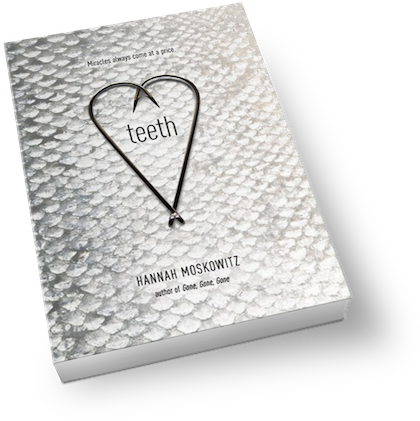 A gritty, romantic modern fairy tale from the author of Break and Gone, Gone, Gone.

Be careful what you believe in.

Rudy’s life is flipped upside-down when his family moves to a remote island in a last attempt to save his sick younger brother. With nothing to do but worry, Rudy sinks deeper and deeper into loneliness and lies awake at night listening to the screams of the ocean beneath his family’s rickety house.

Then he meets Diana, who makes him wonder what he even knows about love, and Teeth, who makes him question what he knows about anything. Rudy can’t remember the last time he felt so connected to someone, but being friends with Teeth is more than a little bit complicated. He soon learns that Teeth has terrible secrets. Violent secrets. Secrets that will force Rudy to choose between his own happiness and his brother’s life.

*A copy was provided by Simon & Schuster for review*
This has to be one of the oddest books I’ve ever read, ever! Having read Gone Gone Gone by Hannah, I knew her writing was brilliant, her words are some that will enrapture you one hundred percent, and her stories are filled with genuine emotion. Teeth is no exception. We embark on an extraordinary tale of love and loneliness, with characters that are both fantastically bizarre, and incredibly charismatic.

Having moved on this island to help heal his brother’s illness, Rudy is being crushed by the isolation, eventually finding solace in a new friend he meets at the beach. This new friend is quite… strange, and in more ways that what’s made immediately obvious. His character and personality reflect his unorthodox upbringing and lack of education, but his heart is as big as ever. These two develop a connection that is the heart and soul of this story. Their friendship truly radiates as something very unique and special. Though like in real life, it’s not always easy, it’s sometimes frustrating, it’s also something of a need more than anything. I thought this was especially well written; from their conversations to their confusing feelings, it would flow so freely off the pages like something you could touch. This wasn’t only manifested between these two, but also between Rudy and his family–especially his little brother who is only trying to get well enough to enjoy his life. The family dynamics emit the emotional consequence of having to struggle every single day with death around the corner. I found this as equally poignant as the Rudy/Teeth story, throwing my emotions around at every turn. I found myself caring so very deeply for this family’s well-being, praying for his brother to get better, and missing his energy during outbreaks. It’s safe to say the character development here is commendable.

The plot surrounds mostly Rudy’s friendship with Teeth, as well as his acceptance of the whole isolated island situation. Being one of the only teenagers, he’s struggling with loneliness and missing his friends from back home, craving normality, even the slightest human touch. When he finds Teeth, his whole way of thinking completely changes, and for many reasons. This is one of those books that are especially hard to review as its plot contains spoilers from very early on. So for fear of revealing any, I will only comment on my promise that it’s like nothing you’ve read before. It’s weird, it’s bizarre, it’s eccentric… it’s unique! Its originality is unreal, with secrets that will leave you stunned, a little sad, sometimes even grossed out; if it is anything, fascinating is what it is. I was a big fan of its ambiguity as well. Not a lot of reason is given other than it simply existing. This is not a book that contains detailed history or even deep speculation of its “magic”, it’s just something you have to accept without question. You may be thinking this is something you’re sure you would dislike–I would be too upon reading this–however, never did I wish anything more. It was perfect for what the story is trying to be. I might even say more specifics might have ruined the book’s enchantment.

If you’re already a fan of Hannah Moskowitz, you know her way of writing is one that will compel you deeper at every word. If you’re new to this author, especially fans of contemporary fiction, I urge you to jump on this exquisite, emotion-filled bandwagon, you will not regret it!