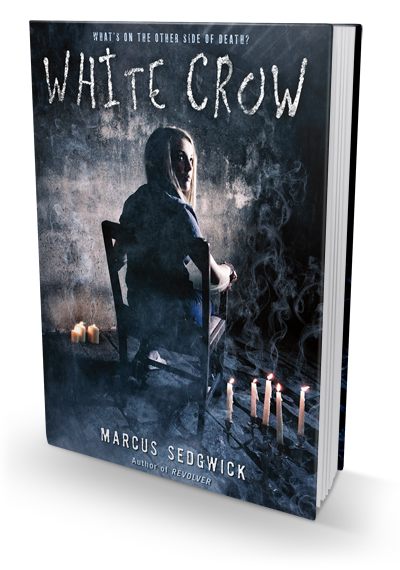 With its creepy cover and synopsis, I was sure White Crow would be the perfect read for my creepy loving taste. When creepy turned to odd, and by odd I mean barf-on-some-pages-and-call-it-a-book odd, I knew I was wrong. *sigh*

A very spooky setting, White Crow lands us inside an eerie little town that is being slowly decimated by the ocean. This town inhabits only a small population and a lot of run down or abandoned dwellings. I thought right then it was going to be a fantastically creepy novel, and for the most part it was. Talk of the devil, mysterious room with a bolted down chair and mysterious visitors who never leave? Yeah I’d say that’s pretty freaky. But the execution, holy mother of weird! Told in alternative point of views, we get a sinister history of one of these buildings from a past perspective. This perspective, however, immediately put my guard up when the voice of the character showed little appeal. Albeit part of it was due to it being set in such a long-ago time, and by long ago I mean the 1700s, making the language very hard to get into, but it was also due to the odd way those parts were told. They were mostly glimpses, full chapters that consisted of one paragraph, or even one single sentence, and these glimpses were truly weird, especially at first when you have no idea what’s supposed to be happening. They were random passages from the past involving thoughts of the devil and God. Thoughts that derived of a mad man making little to no sense, not even interesting in a cryptic way–some parts I had to reread and still couldn’t decipher what was happening. It was literally like gibberish. Even though at times it did give me the creeps, I didn’t fully get the hang of this part of the story until past halfway.

The other two perspectives were much more compelling and easier to read. We have Rebecca who is the main protagonist and the first character we’re introduced to. She’s an average girl who just moved to this unfortunate town where she meets out other perspective, Ferelith who is an especially strange person–in looks and in personality. While I did find their story actually fairly intriguing, especially Ferelith’s bizarre ways, there was something off from the whole writing style. The perspectives did not flow well together at all. Made worst by how Ferelith’s was in first person, and Rebecca’s in third. Although it can work sometimes, the alternating persons threw me off in his case, creating an unfortunate disassociation with them both. It was also so short that every perspective seemed to pass and shift in a blur, making it difficult to make sense of anything that was happening. On one side we have the past where we get ominous vague events thrown at us, on the other we get what basically feels like a story with no plot at all, just all this weird… weirdness. I quite honestly don’t know what the point behind the plot was. There were these random elements thrown into it as well, like her father being accused of a murder, or Ferelith’s foster home situation, these were spewed out and not explored in the slightest. It was all super odd!

In short, this book was just a big bucket of weird. I can’t even think of who I would recommend it to. I think it does have its niche of readers would enjoy it, it would definitely need to be readers who like very ambiguous stories, but then again, I’m a big fan of cryptic reads. *shrugs* At least it was short.